Christmas Eve at Portland Head Light, 1886: "Even Santa Claus Was Afraid to be Out" 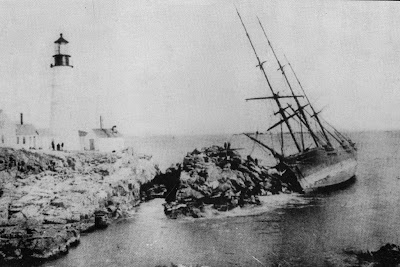 The wreck of the Annie C. Maguire ranks among the most famous Maine shipwrecks for one reason. It occurred right next to one of the most popular lighthouses on the East Coast, Portland Head Light in Cape Elizabeth, Maine.

The ship we know as the Annie C. Maguire led two lives. The first incarnation was the extreme clipper ship Golden State, built on the East River in New York City in 1852-53. In early 1883, after an unusually long 30-year career in the China trade, the Golden State was converted to bark rigging.

Renamed the Annie C. Maguire, the bark sailed under the British flag in North and South America during the 1883-86 period. The Maguire was headed home to Quebec in December 1886, after leaving Buenos Aires, Argentina. On board with Captain Daniel O’Niel were his wife and 12-year-old son, two mates, and 13 crewmen.

The Maguire entered Casco Bay at about 11:00 p.m. on Christmas Eve, with the intention of riding out the bad weather in Portland Harbor.A heavy sea was visible outside Portland Harbor that day, as a winter storm was raging offshore. At Portland Head Lighthouse in Cape Elizabeth, a few miles from the harbor’s entrance, Keeper Joshua Freeman Strout was asked by a sheriff’s officer to keep an eye out for the ship, in case the captain decided to duck into Portland Harbor to take shelter from the storm.

Joshua Strout was a former sea captain who had become a lighthouse keeper at Portland Head in 1869 after a fall from a masthead forced him to give up life at sea. Joshua and his wife, Mary (Berry), raised 11 children at the station. Mary Strout served as an assistant keeper until 1877, when her son Joseph Woodbury Strout was named assistant.  Joseph Strout went on to succeed his father as principal keeper in 1904, and he retired in 1928 after living for 59 years at Portland Head.

Joseph Strout was described as “a “bronzed, hardy little man, comfortably inclined to corpulence” in a 1927 article, in which he recalled the night the Annie C. Maguire was wrecked. Some accounts of the event claim the weather was clear, but Joseph Strout firmly stated otherwise: “The wind was howling a gale,” he said. “It was Christmas Eve, you know, and I guess even Santa Claus was afraid to be out."

Strangely, in an interview in 1929, Joseph Strout said it was snowing so hard “you couldn’t see a hand in front of you,” but that the night was calm and there was no wind. He said his father was on watch in the lighthouse and the “world as silent as death.” Windy or not, in both interviews Strout stressed the fact that it was snowing heavily.

At about 11:30 p.m., as Joshua Strout kept watch in the lighthouse tower, Joseph was preparing for bed. Suddenly, Joshua burst through the door of the keeper’s house and exclaimed, “All hands turn out! There’s a ship ashore in the dooryard!” Joseph fumbled as he put his socks and shoes back on, and then bolted down the stairs a half-dozen at a time.

When he emerged from the house, Joseph Strout was amazed to see the ship on the ledges no more than 100 feet from the lighthouse tower, listing to one side. As soon as it had run onto the ledge, the captain had the crew take down the sails and lower the anchors. According to some accounts, Mary Strout shed light on the scene by burning blankets that had been cut into strips and soaked in kerosene.

There are varying versions of how the Strouts rescued the people from the ship. In 1927, Joseph Strout said that the water was calm enough to permit the men “to jump ashore, almost without help, so hard on the ledge was the vessel.”Some have claimed the Strouts rescued everyone with a breeches buoy. Other sources claim the Strouts put a ladder across the ship, and all aboard made it safely across the ladder to solid ground, which seems more likely. It was too short a distance to warrant a line from the shore to the ship, and there would have been a rush to get everyone off as quickly as possible in case the Maguire broke apart.

Mary Strout soon had hot coffee and food ready for the shipwreck victims in an engine room. They were ravenous after their long voyage with little more to eat than salt beef and macaroni. Joseph Strout said in 1929:

The day before we had killed eight chickens so that we could have a big feed on Christmas. Ma made all eight into the best pie you ever tasted. But it didn’t make no impression on that crew of three-quarter starved blotters though. I only got one plateful. But we should worry. A feller doesn’t get wrecked often, and when it happens where he can eat after starving for weeks, you can’t blame him for passing his plate until it’s all gone. Once they got that chicken pie into them, the whole gang wanted to stay. They loafed around three days and ate most of the food we had while Dad did his best to convince them that we were a lighthouse and not a life saving station.

Joshua Strout was put in charge of the ship by the deputy sheriff, and the wreck was soon surveyed. The New York Times reported on December 27 that the Maguire’s bottom was “badly stove.” It was thought that the ship would likely break apart in the next storm, so Joshua Strout ordered that everything removable be brought ashore as quickly as possible. The Maguire broke apart in a storm about a week after the wreck. 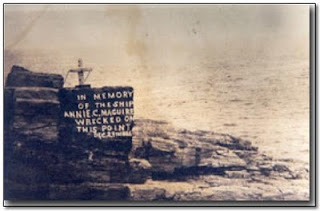 Joseph Strout’s son, John A. Strout, was born at the lighthouse in 1891. He followed the family tradition by becoming an assistant keeper under his father, on his twenty-first birthday. On the same day, John A. Strout painted an inscription on the ledge where the Maguire was wrecked. He first had to chip much of the huge rock to make a flat surface on which to paint, and the lettering was applied with a mixture of paint, mortar, and sand. 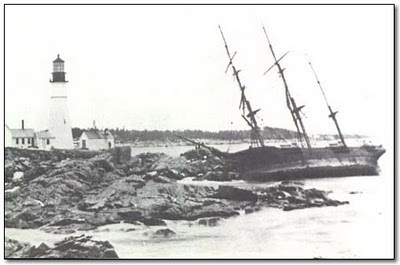 The exact wording and spelling of the inscription have varied over the years and a wooden cross that once topped the rock is gone, but the tradition of repainting it continues as a reminder of the Christmas Eve when a once proud ship almost hit the lighthouse.

This is a shortened version of a chapter from my book, Great Shipwrecks of the Maine Coast, published in 2010 by Commonwealth Editions.
Posted by Lighthouser at 11:29 AM