Halfway Rock is a windswept, rocky ledge far out in Maine’s Casco Bay, about nine miles east of Portland Head. Its name comes from its location about halfway between Cape Elizabeth and Cape Small. A 76-foot granite lighthouse tower was built on the ledge in the summer of 1871. It’s now privately owned and has been restored in recent years. 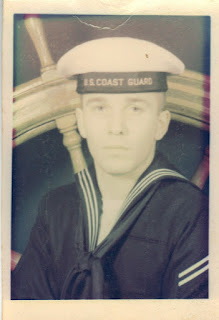 Tim Bailey was born in Gardiner, Maine, but he spent his school years in Connecticut. After graduating from high school, Tim joined the Coast Guard. After his time as a keeper at Halfway Rock (1971-72), he was stationed at Boothbay Harbor, Maine, then   Seguin Light Station off the mouth of the Kennebec River. In this interview, he discusses his experiences at Halfway Rock and Seguin Island. Joining in on the interview is Ford Reiche, the owner of Halfway Rock Lighthouse.

Photographer Mike Leonard lives in Yarmouth, Maine, and his photography is frequently seen in books and magazines, and in television segments. Mike offers workshops on digital photography, which you can read about on his website at phototourismbymike.com. In this installment of “Photo Tips with Mike Leonard” he discusses night photography of lighthouses. 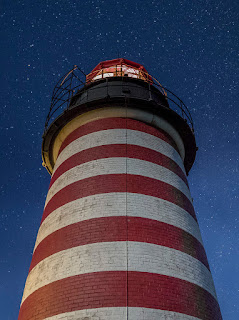 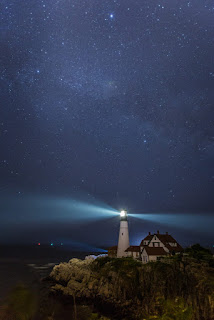 Click here to listen to the podcast
Posted by Lighthouser at 11:30 AM