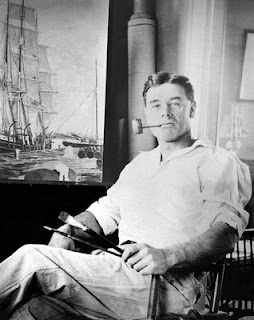 The following is an edited version of an article I wrote a few years ago for Lighthouse Digest magazine; you can read the whole thing here. The saga of Keeper Arthur Small and his wife, Mabel, is sad and inspiring at the same time. I've spent a great deal of time researching Small and retracing some of his steps around the New Bedford area, and I feel strongly that he deserves to be remembered as a true hero.

In 1922 Keeper Arthur A. Small, a native of Brockton, Massachusetts, became keeper at Palmer’s Island Lighthouse in New Bedford, moving there with his wife Mabel and two sons from Boston Harbor’s Narrows (“Bug”) Light. Known to many as Captain Small, he was a well-traveled seaman who had first gone to sea on a Maine fishing schooner at the age of 14 and had traveled around the world in 1907-09 in President Theodore Roosevelt’s Great White Fleet of battleships.

Arthur Small was also a gifted artist of sailing ships and harbor scenes, praised for his attention to detail. He started painting on scraps of sail as a hobby during his years at sea, and he later took classes to sharpen his skills.

Small was a member of the Mariners’ Club, which met for conversation and chowder at the Peirce and Kilburn Shipyard in Fairhaven just across the Acushnet River from New Bedford. A number of Small’s paintings were displayed in the area where the club met.

The popular historian Edward Rowe Snow quoted Arthur Small’s description of the importance of Palmer’s Island Light to the commerce of New Bedford Harbor, saying that without the proper functioning of the light and fog bell, “all the city would be seriously crippled.”

But Small downplayed the so-called heroism of keepers. “Whenever they say anything about a lighthouse keeper,” he once said, “they always act as if he were some kind of hero. We’re not heroes. Here I am on this island, perfectly safe, working and painting pictures, while you wander around in New Bedford, crossing streets with automobiles and trolley cars whizzing by, just missing you by a few feet. Why, you people take more chances in a week than I do in ten years.” He would later disprove his own words.

On September 20, 1938, Mabel Small took part in one of her regular activities, a sewing circle in Fairhaven. One of the other women there saw Mrs. Small looking anxiously out at the water. The woman asked what was wrong, and Mabel Small replied that the seas were rough and she feared that Arthur would not be able to row over from Palmer’s Island to pick her up. But her husband was waiting at the landing at the usual time, and Mabel shouted, “See you girls next week!” as she headed home to Palmer’s Island.

The very next day, a ferocious hurricane took the area by surprise as it battered the south-facing coast. During the afternoon of the storm 53-year-old Arthur Small attempted to walk the 350 feet from the house to the lighthouse on Palmer’s Island. He left his wife at the oil house, which he considered to be relatively safe as it was on the island’s highest point.

As he struggled to reach the tower, Arthur Small was struck by a large wave and was swept underwater. He managed to swim back to safety. He looked back and saw his wife attempting to launch a rowboat to come to his aid. As Mabel Small tried to launch the boat a tremendous wave destroyed the boathouse, and Arthur Small lost sight of his wife.

Keeper Small later said, “I was hurt and she knew it. Seeing the wave hit the boathouse was about the last thing I remember. I must have been hit by a piece of timber and knocked unconscious. I came to some hours later, but all I remember was that I was in the middle of some wreckage... Then I must have lost my sense again, for I remember nothing more.”

Somehow Arthur Small kept the light burning through the night. The morning after the hurricane, two friends of the Smalls had rowed to the island. They took Arthur Small to a local hospital under police escort. They had first contacted the Lighthouse Service for permission, as no keeper was to leave his post until relieved “if he is able to walk.”

Three days after the storm, Commissioner Harold D. King of the Bureau of Lighthouses called Arthur Small’s performance during the storm “one of the most outstanding cases of loyalty and devotion that has come to the attention of this office.”

Mabel Small had not survived. Her body was later found and identified in Fairhaven. Many of Keeper Small’s paintings were lost in the hurricane along with his large library of several hundred books. His wife had their savings of about $7,500 in her possession when she drowned, and this was also lost.

Arthur Small asked for no compensation for his paintings, but in his official report he assigned a value of $75 to his library and $100 to his records and notes on sailing ships, “the result of thirty years’ work and used for reference in painting the history of sailing ships, a spare-time hobby.” After an extended leave that included time in Panama, Small became keeper at Hospital Point Light in Beverly, Massachusetts, in 1939. During World War II he maintained a shore patrol in the area and had to check Derby Wharf and Fort Pickering lights in Salem in addition to Hospital Point Light.

When Arthur Small died in 1958, he was honored by the Coast Guard with a burial at Arlington National Cemetery. A plaque honoring Arthur and Mabel Small can be seen today on the Fairhaven side of the harbor at Fort Phoenix.

Posted by Lighthouser at 11:17 AM No comments:

Dining with the Dead

Author and lighthouse historian Jeremy D'Entremont and renowned paranormal investigator and radio personality Ron Kolek discuss some of the most haunted lighthouses in New England at the Windham Restaurant in Windham, NH, on Monday evening, April 27, 2009.

They will reveal the legends and the results of their investigations into these buildings including their Emmy-winning investigation into New London Ledge Lighthouse. A portion of the proceeds of the evening will go to Friends of Portsmouth Harbor Lighthouse.

Click here for more info and tickets.
Posted by Lighthouser at 11:00 AM No comments: