I took this photo of one of Maine's prettiest lighthouses at sunset on a very cold day a couple of years ago.

Sakonnet Lighthouse to be Restored in 2010-11 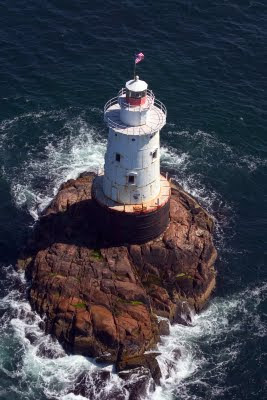 Wonderful news yesterday on the Eastbayri.com site -- Rhode Island's 1884 Sakonnet Lighthouse, in desperate need of help, will be restored in 2010-11. The bidding process for contractors will take place this winter, and it's hoped that the work will begin in the spring. John M. Wathne, a structural engineer and principal with Structures North Consulting Engineers of Salem, Mass., will manage the project. You can click here to read the story.

This is one of New Engand's most fascinating wave-swept lighthouses. Here's part of Keeper William Durfee's account of the great hurricane of 1938:

By three o'clock the wind blew a gale and the sea began to go higher and higher. Pounding with such a force that it smashed up all the boats and by four o'clock we had lost part of our rain shed, one oil tank, a boat landing, also smashing in the engine room and flooding the engines and putting the fog signal out of commission.

At five o'clock all outside doors had been carried away and all windows from the first floor to the third floor were stove in, so that we were practically flooded out of our home.

At five-thirty I went into the tower to light up. While there, we took what was called a tidal wave. There were seas that went by that completely buried the tower. The first sea that came along was the one that caused the most damage. That one broke seven plates out of our upper deck, which is fifty-six feet from the average high water. That sea, when it hit the tower, sounded like a cannon. And it hit with such a force as to knock me off my feet. . . . But when I finished lighting up and started to go downstairs I was some surprised to find that I had to crawl through some broken deck plates that had fallen over the stairs. . . .

At sunrise Mr. Bouley put the light out and called me to see the beach. And we were surprised when we looked to the point and saw that everything had been washed away.

For more history, see this page.
Posted by Lighthouser at 8:38 AM No comments: