Fort Pickering Light in Salem, Mass., gets a makeover

Story and photos by Phil Karwowski


In mid-September 2013, contractors began giving the 142-year-old lighthouse on Salem’s Winter Island a much needed makeover. The scope of work included chipping, scraping, sanding, and cleaning the rusted surfaces of the 32-foot, cast-iron tower. After workers completed the two-month project, the tower looked great.

Dave Gilbert, manager of the Winter Island Park, thought it would be a good idea to decorate the light for the holidays. A six-foot diameter wreath was placed on the tower with the help of Salem Harbormaster Capt. Bill McHugh and Deputy Harbormaster Patrick Mulligan. 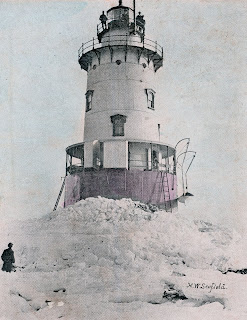 John J. Cook, a native of Denmark, was the keeper of Stamford Harbor Lighthouse in Connecticut 1907-09. Cook went to sea early in life and had been awarded many medals during his years in the U.S. Navy.

A reporter once asked Cook how he could possibly enjoy Christmas in an isolated, lonely, offshore lighthouse. Cook explained that with such unpredictable weather and sea conditions, preparations and Christmas shopping had to be done well in advance. He described the Christmas feast they had at the lighthouse a year earlier, with goose, mince pie, and plum pudding. Christmas evening would be spent much like any other, with conversation, or card playing, or perhaps the reading of books or newspapers.

The rest of Cook's reply showed him to be quite a philosopher:

I dunno, it is pretty lonesome here sometimes, especially in winter, but we manage to enjoy our holidays. We can’t go to church on Christmas and we miss the nice music and the fine sermons, but there is a compensation for that. What more soul-stirring music could there be than that of wind and wave as they whistle and roar or moan and swish past our little home? And that light aloft is a sermon in itself. Many a fervent "Thank God," many a heart-deep prayer has gone up, maybe from people who wouldn’t be thinking of such things ashore, when the red gleam of Stamford Light was made out in a storm, or the bell heard in a fog. My little light has its mission just as your pulpit preacher has his; and no one who has watched it through the terrible winter storms can fail to appreciate this, and with it his responsibility. Human life, yes, human souls depend upon that light Christmas and every other night of the year, and I dare guess it’s compensation for the loss of a Christmas sermon to keep the light burning steadily.
Posted by Lighthouser at 9:38 AM 1 comment:

Are you looking for books about New England's heritage and landscape to give as presents this festive season - or even to suggest as possible gifts for yourself? If so, there are a number of new and recent titles to choose from, including Everyday Heroes: The True Story of a Lighthouse Family, tracing the story of Seamond Ponsart Roberts, who spent her childhood at three Massachusetts lighthouses.

Here is a look at a few more books which could also make ideal holiday gifts for anyone who loves this unique region, whether they live here or are planning a visit.


Coastal History
Cold winter nights are the perfect time to delve into tales of the past along the New England coast. Written by local historian Robert A. Geake, who runs a blog about the region's past, The New England Mariner Tradition is published by The History Press and has the intriguing subtitle "Old Salts, Superstitions, Shanties and Shipwrecks." The author has spent the last 30 years researching and writing about the history of Rhode Island, covering everything from ancient inns to the Providence River, which was the theme of another of his recent books. He has gathered together many quirky tales, including the spotting of a sea serpent off Nahant in 1818.

The book also has a more serious side, looking back over three centuries at what life was like for sailors constantly facing the prospect of death at sea. Many old superstitions are examined, including dance ceremonies and donations of gin to calm storms supposedly caused by "old Neptune." The book also looks at the role of lighthouses along the coast in cutting the toll of shipwrecks.

Another interesting new title is Looking Back at South Shore History by John L. Galluzo, also published by The History Press, as part of their American Chronicles series. This book brings together a collection of historical columns from South Shore Living magazine, including an article about the first keeper of Scituate Lighthouse in 1811.

Guide Books to Savor
Many visitors from around the world enjoy sailing around the US coast, and a growing number arrive here by cruise liner. Planet Cruise says that a Transatlantic cruise gives memories which will last forever, and the same is true for a sea journey along the New England coast, discovering the wildlife and exploring the lighthouses and other historic buildings. The right guide book can help to make the trip even more enjoyable, and there are some new ones available.

The Explorer's Guide: The Maine Coast and Islands by Christina Tree and Nancy English, published by Countryman Press, is full of detailed information. Subtitled "Key to a Great Destination", the latest edition has separate sections on each part of the coast, from the south, including the Yorks and Kittery, to Washington County in the east. There is also detail on Maine's islands. Another new Coastal Maine by Hilary Nangle, in the Moon Handbooks series, which suggests offbeat trips such as one combining lighthouses with lobsters and LL Bean. The author has a website full of further suggestions about travel around Maine.

Recipes from the Coast
Cookbooks are always popular festive gifts, and this season some are available with a The Coastal Table, by Karen Covey, published by Union Park Press, brings together recipes "inspired by the farmlands and seaside of southern New England." The author tells how she originally just wanted a weekend getaway on the south coast of Massachusetts, but ended up making her home there. Her cookbook includes many fish and seafood recipes, plus other ideas using fresh local produce. It also includes contributions from top New England chefs. Another mouthwatering new offering is Simply New England by chef Daniel Bruce of the Boston Harbor Hotel, published by the Lyons Press. Bruce says he aims to celebrate both land and sea, and lobster and halibut feature in some of the recipes.
There's even a reprint of a book combining cookery and history, The New England Economical Housekeeper, and Family Receipt Book by Esther Howland, first published in 1844. This contains more than 220 recipes, ranging from main meals to puddings and traditional medical remedies. The book gives a fascinating glimpse of 19th-century family life and customs, and cooking up some of the dishes - if you can get the ingredients! - will give a taste of the past.
Posted by Lighthouser at 8:31 AM No comments: 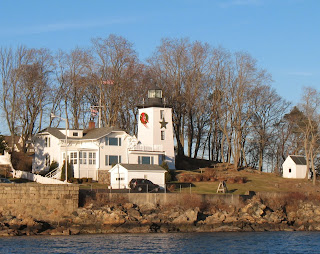 The U.S. Coast Guard Auxiliary Division 4 Lighthouse Team has been busy preparing Hospital Point Light in Beverly, Massachusetts, for the holidays. The lighthouse team continued their tradition of placing a holiday wreath and star on the lighthouse tower.

Seventeen members of the team and one volunteer, gathered at Hospital Point on a sunny but chilly morning, to prepare the wreath and star.

The tasks involved the placement of an oar and boat hook, a large bow, and rope lighting on the six-foot diameter wreath, and of course, hauling the wreath and star up onto the tower. 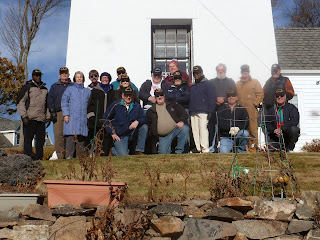