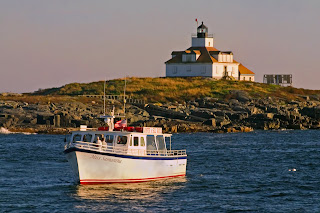 Great news! Volunteer crews have completed staining and repairs at Egg Rock Lighthouse, near Bar Harbor and Winter Harbor, Maine. The 1875 lighthouse is now owned by the U.S. Fish and Wildlife Service (USFWS), while the optic is still owned and maintained by the Coast Guard.

This is a wonderful example of teamwork on behalf of a historic lighthouse. Anyone interested in helping with the restoration of Egg Rock Lighthouse should contact Zack Klyver at Bar Harbor Whale Watch at 207-288-2386. 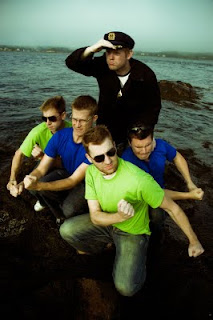 On Sunday, October 25, 2009, at 4:00 p.m., the Sea Captains will perform at Portsmouth Harbor Lighthouse. No, these captains aren’t the ghosts of lighthouse keepers past – they’re a pop-rock band based in Southern Maine and Seacoast New Hampshire. The outdoor performance at the lighthouse will celebrate the release of the band’s first full-length studio album, Unfathomable, which will be available beginning October 20 at Bull Moose Music stores and electronically on Itunes, CD Baby, and at www.theseacaptains.com.

The 11-song album was produced and recorded over three sessions with Jonathan Wyman at The Halo. It accurately captures the sound of the Captains’ energetic live show with undeniably fun, witty lyrics, and contagious melodies. The band members are longtime friends and musical collaborators who have united with the goal of sharing their fun, upbeat pop/rock music with audiences of all ages. Since 2007, the Sea Captains have toured the Northeast with great success. 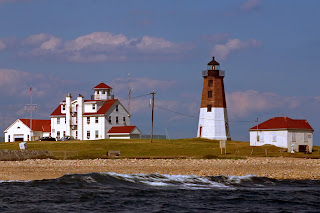 Point Judith, the southernmost extremity of the town of Narragansett, juts out from the surrounding coast for about a mile into Block Island Sound. Boat traffic past the point has been heavy for centuries with vessels traveling between New York and New England, and others heading north into Narragansett Bay.

There are varying accounts of how the point got its name. There's a persistent legend about a Nantucket sea captain and his daughter who were passing the point in thick weather. The captain’s daughter was named Judith. Upon sighting land through the fog, she shouted the news to her father. The captain, unable to discern anything in the fog, exhorted his daughter to “P’int, Judy, p’int!”

Congress appropriated $5,000 for a lighthouse at the point in February 1808. It was the state’s third lighthouse, after Beavertail and Watch Hill. The first lighthouse tower was short lived. It was laid flat on September 23, 1815, by a tremendously destructive hurricane that would be remembered as the Great Gale of 1815.

In April 1816, $7,500 was appropriated to rebuild the lighthouse, and a 35-foot octagonal tower constructed of rough stone was erected that same year. The focal plane of the light was 74 feet above the sea.

Edgar Ravenswood Eaton was keeper from 1849 to 1853. In the files of the Newport Historical Society is a stern letter to Eaton dated November 18, 1850, from Edward Lawton, the local lighthouse superintendent. Lawton wrote:

Complaint has been made at this office that your Light was out from two to half past 4 o’clock this morning; how much longer the complainant could not tell. I presume it is not necessary for me to say that such an occurrence is altogether inadmissible; your light is an important one & the consequences from missing it are serious indeed—if your oil is not good or the revolving apparatus is out of order let me know immediately, and I beg of you let no more complaints be made that the lights are out.

Sir I was up all night tending to a sick child and was at the Light house after 1 oclock at night it was then a bright light. . . . I was out doors about four o’clock in the morning and the light was bright then I am serting. [sic]

In 1857, a new tower and connected brick dwelling were constructed. The 51-foot octagonal tower is built of brownstone blocks and is 24 feet wide at the base, 13 feet wide at the top. Its interior is lined with brick. When the tower was built, a fourth-order Fresnel lens replaced a system of 10 Argand oil lamps and 21-inch reflectors.

A family dynasty of keepers that would span nearly a half-century began in 1862 when Joseph Whaley—oldest of 11 children and a native of Narragansett—arrived as keeper at a yearly salary of $350. “Captain Joe” and his wife raised three daughters and a son in their 27 years at the lighthouse. Their son, Henry, would become the next keeper in 1889 (at $650 per year), staying until 1910.

With heavy maritime traffic, wrecks continued to occur with regularity in the vicinity of Point Judith. On September 9, 1896, while Henry Whaley was keeper, a storm with winds of 80 miles per hour ran into the coast. At least five vessels were wrecked near Point Judith in the storm, and passengers on board the steamer Rhode Island reported that they received “a terrible shaking” while passing the point.

In 1899, the previously all-white tower was changed to its now familiar daymark, with the upper half brown and the lower half white. Thanks to a $230,000 Coast Guard restoration in 2000, the lighthouse tower is in excellent condition. The fourth-order Fresnel lens was removed from the tower in April 2000 and was transported to the Coast Guard Aids to Navigation Team facility at Bristol, Rhode Island. The refurbishment of the lantern by Campbell Construction Group included the replacement of some of the original panels.

The lighthouse is on the grounds of Coast Guard Station Point Judith and is accessible to visitors during the day. The tower itself is not open. The site is easily accessible at the end of Ocean Road, off the end of Rhode Island Route 108.

For more, visit www.lighthouse.cc/pointjudith/. Click here for a photo gallery.
Posted by Lighthouser at 8:10 AM No comments: