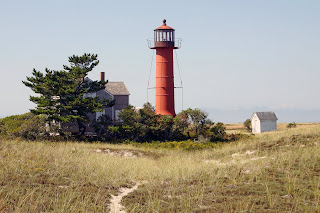 Monomoy was once a peninsula some eight miles or so in length and barely a quarter mile in width, extending southward from Chatham at the elbow of Cape Cod’s flexed arm. The name comes from “Munumuhkemoo,” an Algonquian word roughly meaning “mighty rush of water.”

Monomoy is at the dividing line between Nantucket Sound, to the west, and the deeper, colder Atlantic Ocean to the east. Where the sound and ocean meet—east and south of Monomoy—dangerous “rips” occur where as rapid ocean waves pass over shallow shoals and bars. Despite the menacing conditions, the passage between the southern end of Monomoy and Great Point, the northern extremity of Nantucket, was one of the Atlantic coast’s busiest stretches for many years.

Congress appropriated $3,000 for Monomoy’s first lighthouse—the fifth on Cape Cod—on March 3, 1823. The first Monomoy Point Light consisted of a wooden tower and iron lantern situated on the roof of a brick dwelling. The fixed white light was established on November 1, 1823.

Asa L. Jones, a native of the Cape Cod town of Harwich, was keeper from 1875 to 1886. Jones, who was born in 1840, had been wounded in the Civil War. His young son, Maro B. Jones, kept a diary that provides a glimpse of life at the light station in the 1884–86 period. Here are some excerpts, beginning when Maro was eight or nine years old.

March 25, 1884: Good weather. Papa killed a black duck. March 31, 1884: Good weather. Papa bound a book. Seven geese came to the pond. Papa tried to shoot them. July 4, 1886: Not much of a Fourth of July for me. I never saw as much as an explosion with gunpowder. It is funny that today has been the most lonesome day of the summer. July 26, 1886: Mr. Ben Mallowes has got a sort of turtle and it looks like a sea cow. No one knows what it is, not even old whalers and Papa is going to write a man to come and get it.

James P. Smith, a native of Copenhagen and a former assistant keeper at Boston Light, became keeper in 1899. His wife died early in his stay at Monomoy, but Keeper Smith had three daughters—aged 24, 17, and 13 at the time of a 1904 article—who assisted him in his duties. The oldest daughter, Annie, acted as housekeeper and tended the light when her father was away. A reporter once asked the Smith sisters if life at the lighthouse was lonely. Annie replied, “Oh, no! We don’t have time to be lonesome. There is always something to do, with the housekeeping and the light.”

With the opening of the Cape Cod Canal in 1914, traffic past Monomoy decreased. The light was discontinued in 1923 and the property passed into private hands. The last private owners sold the buildings to the Massachusetts Audubon Society in 1964. The property came under the management of the U.S. Fish and Wildlife Service (USFWS) in the 1970s.

The ferocious blizzard of February 6–7, 1978, cut Monomoy into two islands, North and South Monomoy. South Monomoy is a birdwatcher’s mecca, with more than 300 species having been spotted in recent years. Gray seals, once rare in New England, have been breeding on South Monomoy.

Capt. Keith Lincoln offers a variety of cruises on the Monomoy Island Ferry, including a visit to South Monomoy and the lighthouse. See www.monomoyislandferry.com or call (508) 945-5450.
Posted by Lighthouser at 8:51 AM No comments: