Rusty Nelson, an extraordinary volunteer, will be missed 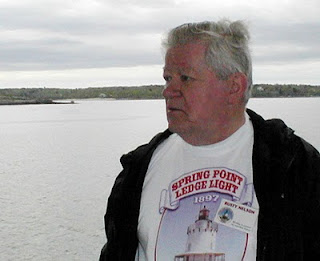 I've just learned that Lester "Rusty" Nelson passed away on January 5, 2010, at 80. Rusty was a longtime volunteer for the Spring Point Ledge Lighthouse Trust in South Portland, Maine. He was a graphic designer by trade, and for many years he did the layout for the U.S. Lighthouse Society's magazine, Keeper's Log, and designed the stamps for their "lighthouse passport" program. He also created the historic displays inside Spring Point Ledge Lighthouse.

It was a 1991 visit to the Shore Village Museum in Rockland, Maine, that sparked Rusty's passion for lighthouses. In 1995, he became a trustee of the Portland Harbor Museum and the museum's resident “lighthouse person.” In 1998, he became the first chairman of the new Spring Point Ledge Light Trust, a position he held for five years. Rusty also spearheaded the relighting of Portland Breakwater Lighthouse (Bug Light).

Rusty was always cordial and pleasant -- a true gentleman. He once said that the best part of working with lighthouses is the people you meet.

He was the kind of volunteer any organization would be very lucky to have, and he will truly be missed in the lighthouse community. A memorial service will be held at a later date.

Posted by Lighthouser at 10:43 AM No comments:

Portsmouth Harbor lighthouse in need of a new coat of paint

NEW CASTLE, NH — It seems as if every time Jeremy D'Entremont visits the Portsmouth Harbor Lighthouse these days, more and more paint has chipped away from the pearly white beacon, and rust has gradually begun to pop up on the outer facade.

For D'Entremont, operations manager for Friends of Portsmouth Harbor Lighthouse, the flaking paint and rust spots are an "ongoing battle" that need to be addressed sooner rather than later.
Click here to read the rest of this story.
Posted by Lighthouser at 10:35 AM No comments: Sadly, the grounds at this attractive lighthouse are normally off limits to the public because a Coast Guard family lives in the keeper's house. This photo was taken during a bus tour that visited there a few years back.

Posted by Lighthouser at 8:17 AM No comments: