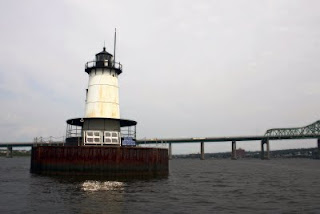 The city of Fall River, situated where the Taunton River flows into Mount Hope Bay, was famed as the “Textile Capital of the World” in the nineteenth century. At one time, more than 100 cotton mills in Fall River employed over 30,000 people.

For a number of years before a lighthouse was built to warn of a dangerous reef at the mouth of the Taunton River, an unlighted day beacon marked the spot. On June 16, 1880, $25,000 was appropriated for a lighthouse on Borden Flats, and construction soon commenced.

A cylindrical cast-iron caisson was sunk in place on the reef, and then filled with concrete. The components of the superstructure were delivered in July 1881. The cast-iron tower, which doubled as living quarters for a keeper, was erected on the caisson, and the light went into service on October 1, 1881, with a fourth-order Fresnel lens producing a fixed red light 47 feet above mean high water. A fog bell was installed on the side of the tower, with automatic striking machinery.

There were five stories above the basement, including the lantern. The keepers lived inside the tower. Herman Georgie was keeper from 1885 to 1898. The Boston Globe reported in September 1897 that Georgie was found acutely ill with appendicitis at the lighthouse. His wife had been sounding the fog bell and waving to passing boats for some time before people on shore realized something was wrong, and the keeper was quickly rushed to a hospital. “For two days,” said the Globe, “he suffered intense agony at the lighthouse, attended only by his wife.”

Joseph Meyer was keeper on October 8, 1907, when a severe storm hit the area. In the station's log, now at the National Archives in Washington, D.C., Meyer wrote:

Violent SW gale. Occasional heavy squalls. 11 am – A barge of about 800 tons of coal sank in the harbor–two men drowned, and a sloop of 10 tons was wrecked on the beach.

John H. Paul became keeper in July 1912 and stayed until 1927. In the mid-afternoon on August 3, 1912, Keeper Paul was involved in a dramatic rescue. Two Fall River men were passing near the lighthouse in a rowboat. As the men attempted to change places, the boat overturned. Paul saw the accident and immediately launched his boat. One of the men, James Parker, was unable to swim and was lost in the waves. The other man, Matthew Loftus, clung to the overturned boat and was swiftly rescued by Paul. The keeper later received a bronze Carnegie lifesaving medal.

The lighthouse was battered in the hurricane of September 21, 1938, as were most lighthouses on New England's south-facing coast. A new, much wider cylindrical caisson was subsequently added around the old one to provide more protection.

The lighthouse was converted to electric operation on 1957, but the old kerosene lamp was kept on hand as a backup. The Coast Guard crew at the time of a 1961 article consisted of the officer in charge, Boatswain’s Mate First Class Richard Lehl of Somerville, Massachusetts; Boatswain’s Mate Third Class Albert Houde of Fall River; and Fireman Apprentice Richard Robinson of Kansas City, Missouri. The men served 18-month tours at the station at the time, with a monthly subsistence allowance of $77.10 in addition to their regular pay.

The light was automated in the spring of 1963, and the last Coast Guard crew of four was reassigned. For a while, a civilian “lamplighter” was employed by the Coast Guard to turn on the fog bell as needed from shore, with the flick of a switch.

In September 2006, it was announced that the lighthouse would be available for transfer to a suitable applicant under the provisions of the National Historic Lighthouse Preservation Act of 2000. No organizations expressed interest, meaning the lighthouse was sold at auction to the general public. In September 2008, it went to the high bidder, attorney Michael Gabriel of Carson City, Nevada, for $55,000. Gabriel is also the owner of Bloody Point Bar Lighthouse in Maryland and Fourteen Foot Bank Lighthouse in Delaware.

Borden Flats Light can be seen from the Borden Light Marina, a half-mile south of Battleship Cove (home to the battleship Massachusetts) on the Fall River waterfront. See www.bordenlight.com for directions.