Block Island North Light was one of four restoration projects to win this year's Rhody Awards, which are chosen annually by Preserve Rhode Island and the Rhode Island Historical Preservation and Heritage Commission.

The restoration of the North Light began in 2008. The lantern was removed from the building and transported to Georgetown Ironworks in Massachusetts for a complete overhaul. After work on the building and lantern was completed, the lantern was returned to its home in the summer of 2009. A fourth-order Fresnel lens, on display for years in the lighthouse's interpretive center, was returned to the lighthouse's lantern room. A ceremony to relight the North Light as a private aid to navigation took place on Saturday, October 23, 2010. 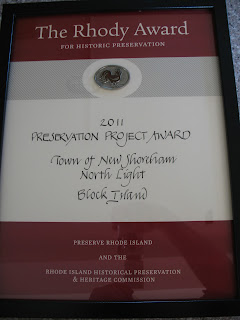 The award was presented on October 14 at the Rhode Island State House in Providence. The project was honored as "an effort that prioritizes materials conservation, environmental stewardship, and community involvement in historic preservation practice."