Moose Peak Light in search of an owner 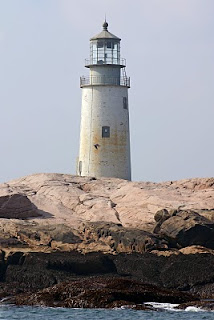 One of the lighthouses currently being offered to a suitable new steward under the National Historic Lighthouse Preservation Act is Moose Peak Light, offshore from Jonesport, Maine. You read the Notice of Availability (PDF file) by clicking here.

Like so many offshore lighthouses, Moose Peak Light took a beating in bad weather. In a storm in 1839, the high seas had washed away the footbridge to the tower and nearly destroyed the lighthouse. Keeper Alexander Milliken reported, “The lantern vibrates and trembles, and also leaks somewhat under the eaves. The distance at which the dwelling-house stands from the light-house renders it dangerous during winter to get from one to the other.”

The present lighthouse tower was built in 1851. In 1901, the walls of the tower were covered with an eight-inch-thick layer of brick masonry.

In 1898, Keeper Charles Dobbins and his son rendered “gallant assistance” to the crew of the Nova Scotia schooner Ashton. The keeper was awarded a gold watch by the Canadian government. Dobbins couldn’t accept the gift until he was authorized to do so by an act of Congress.

Moose Peak Light was automated in 1972 and the Coast Guard keepers were removed. In 1982, a military team blew up the keeper’s house as a training exercise.

Posted by Lighthouser at 11:50 AM No comments:

The 2010 Midcoast Maine Lighthouse Challenge, which occurred on June 26 & 27, offered the public a unique opportunity to not only visit and tour some of the region’s most popular lighthouses, but also the chance to view and learn how the United States Coast Guard works today to keep the lights shining bright.

Click here to read the rest of this story on the American Lighthouse Foundation site.

Posted by Lighthouser at 10:47 AM No comments: