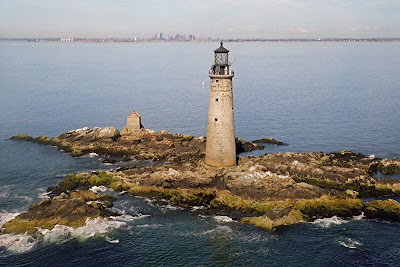 Austere and weather-beaten, Graves Light might appear to the uninformed observer to be a more ancient structure than Boston Light, its neighbor in Boston’s outer harbor. Surprisingly, it’s actually one of Massachusetts’ youngest lighthouses.

The Broad Sound Channel into Boston Harbor, passing north of the Graves Ledges, was improved in the early twentieth century so that larger ships could enter the harbor. Before then, the main entrance to the busy harbor was through the Narrows, between Point Allerton in Hull and the outer harbor islands, which joined the President Roads channel farther inside the harbor. The Broad Sound Channel was rarely used at night, largely because of the dangers posed by the Graves.

In 1902, Congress appropriated funds for a lighthouse and fog signal. A shanty for the workmen, constructed of hard pine, was erected on a high ledge southwest of the lighthouse site and was accessed by means of a 90-foot walkway. The shanty had living quarters, a storeroom, a blacksmith shop, and a kitchen, and up to 40 men lived there in the summers of 1903 and 1904.

An area on the ledge was leveled by blasting, and a landing stage was prepared. A schooner transported the granite to the site. The foundation was laid just 4 feet above the low tide mark, and the lower courses were bolted 3 feet deep into the rock. By the time the summer of 1903 was over, the first 42 feet of the tower were completed, with the blocks having been put into place with the aid of a hoisting engine and derrick. The tower is just over 30 feet in diameter at the base, and the lower stones—held to each other with strong bolts—are 7 feet thick. The lower 42-foot section of the tower was filled with concrete, with a space left for a cistern.

While the tower was under construction, interior ironwork for the lighthouse was being prepared in Boston, interior woodwork was fashioned at a facility in Portland, Maine, and a huge first-order Fresnel lens was being created in Paris, France. The summer of 1904 saw the lighthouse reach its ultimate height—not including the lantern—of 88 feet, with a total of 882 granite blocks in 44 courses.

On the night of September 1, 1905, the first keeper, Elliot C. Hadley, first lighted what was then the most powerful lighthouse in the state’s history. The gigantic lens rotated on 400 pounds of mercury. The total height of the tower—lantern included—is 113 feet. The focal plane of the lens is 98 feet above mean high water. The light was initially rated at 380,000 candlepower. It was later upgraded to 3.2 million candlepower, and it was for many years the most powerful light in New England.

The entrance door to the tower was at the top of a 30-foot ladder, which made entry difficult in rough weather. The first story was the landing and storage space, the second was the engine room containing the fog-signal equipment, and the third floor was the kitchen. The fourth and fifth levels contained the keepers’ beds and a library. Handgrips were built into the outside of the lantern, which made the treacherous job of cleaning the outside of the glass a little easier.

In 1910, Keeper Hadley described the conditions in storms, which generally weren’t as much of a problem as the practice shots fired at nearby forts.

I’ve looked up at solid water rushing in towards the ledges. . . . I don’t know how far up the solid water comes. I’ve been knocked down by it on the wharf beside the light, and opening a window to look out more than halfway up the tower, I’ve had as much as three buckets-full dashed in my face. Sometimes, the seas go clean over the magazine [oil house] set at the end of the bridge. They never shake the tower. That stands as firm as the ledges. The only vibration it gets is from heavy firing at the forts, once when the gun goes off and again when the shot strikes. . . . The way we found out first was by having all our dishes broken.

Four keepers were originally assigned to the station, with two being on at all times. One of the early assistants was Hadley’s son, Elliot C. Hadley Jr. The two Hadleys alternated two-week stints at the lighthouse with the two other assistants. The Hadleys lived a few miles away, in the Point Shirley section of Winthrop, and the trip to the lighthouse via dory was arduous in rough weather, sometimes taking as much as two hours.

In April 1938, the 419-foot British freighter City of Salisbury, recalled as the “Zoo Ship” for its cargo of zoo animals, struck an uncharted rock about one-half mile from the Graves. The vessel’s cargo also included rubber and tea. There was no loss of human life. It was reported that three honey bears and several hundred rare birds from India and Ceylon were rescued successfully, but many monkeys and snakes died later from the effects of the accident. The ship became a tourist attraction for a few months before it finally split in two and sank.

Coast Guard keepers took over the operation of the station in the early 1940s. During the Coast Guard era, there were generally two keepers on duty at all times, with; each man spending spent two or three weeks at the lighthouse followed by a week off.

The light was automated in 1976 and the keepers were reassigned. The light was converted to solar power in the summer of 2001, which eliminated the need for a submarine power cable. Graves Light remains an active aid to navigation, with two white flashes every 12 seconds and an automated foghorn. You can get distant views of Graves Light from the shores of Winthrop, Nahant, and Hull.

For more, see lighthouse.cc/graves/
Posted by Lighthouser at 1:01 PM No comments: