The first lighthouse keeper on the North American continent, 43-year-old George Worthylake, lighted Boston Light for the first time on Friday, September 14, 1716. Worthylake, who was brought up on George’s Island in Boston Harbor, moved to the light station with his wife, Ann. They had five children, and it appears that their daughters Ruth and Ann lived at the lighthouse with them. Two African slaves named Shadwell and Dina also lived with the Worthylakes, and also a servant by the name of George Cutler.

Worthylake also maintained a farm on Lovell’s Island, closer to Boston.Worthylake was paid £50 a year, which was raised to £75 in 1717. He made additional money as a harbor pilot for incoming vessels, and he also kept a flock of sheep on Great Brewster Island. Fifty-nine of his sheep were caught on the long sand spit off Great Brewster during a 1717 storm; they drowned when the tide came in.

In early November 1718, Worthylake went to Boston with his wife and their 15-year-old daughter Ruth. They reportedly attended church in Boston on Sunday, November 2. Some sources indicate that Worthylake also picked up his pay during the visit to the city; in any case, they left to return to Boston Light on Monday morning, November 3.

On their way back they stopped at Lovell’s Island, where Worthylake and his wife and daughter boarded a sloop heading for Boston Light. A friend, John Edge, accompanied them. Witnesses later said that the party were seen to eat and drink “very friendly” while aboard the sloop, “tho not to excess.”

The sloop anchored near Little Brewster Island a little few minutes past noon, and the slave Shadwell paddled out in a canoe to transfer the party to the island. Young Ann Worthylake and a friend, Mary Thompson, watched from shore. Suddenly, the two girls on shore saw “Worthylake, his wife & others swimming or floating on the water, with their boat Oversett.”

The canoe—possibly overloaded—had capsized, and all six people (including the servant, George Cutler) drowned. George, Ann, and Ruth Worthylake were buried beneath a triple headstone in the Copp’s Hill Burying Ground in Boston’s North End. The Worthylakes' daughter Ann soon married a stonecutter named John Gaud, who may have carved the triple gravestone at Copp's Hill.

Benjamin Franklin, 12 years old at the time, was urged by his brother to write a poem based on the disaster. The young Franklin wrote a poem called The Lighthouse Tragedy and hawked copies on the streets of Boston. Franklin later wrote in his autobiography that the poem was “wretched stuff,” although it “sold prodigiously.”


No copy of the poem was known to exist until 1940, when a copy was discovered in an abandoned house on a nearby island by Maurice Babcock, Jr., son of the principal keeper of Boston Light. Edward Rowe Snow, a popular historian of the New England coast who lived nearby in Winthrop, Massachusetts, helped him identify what he had found. In the video clip above, recorded in 1988, he describes finding the poem.

Because the copy could not be authenticated, it's not known for certain if it's what Franklin wrote. Here is the poem found by Babcock:

Oh! George.  This wild November
We must not pass with you
For Ruth, our fragile daughter,
Its chilly gales will rue.

So, home to Lovell's Island
Take us when fails the sea
To the old house where comfort
And better shelter be.

Comes the long weary winter
With its storms of driving snow;
I can only watch the beacon
Sure that you are near its glow.

Yes, dear wife, my constant service
Binds me to this narrow isle,
Love must ever yield to duty
Though the heart be sad the while.

Only grant that on the morrow
We may safely pass the sea,
I can bravely bear my sorrow
You and Ruth here will not be.

With wild nor'wester came this morning,
Cold and clear the heartless sky.
Come wife, take Ruth.  The pull will be long.
So - into the boat I will row you home.

Nestled within her mother's cloak
Frail Ruth is sheltered from the blast,
While Anne looks into George's face
With quick, strong strokes they leave the shore.

Though starting in the Brewster's lea,
Rough and empty rolls the sea.
Low the boat -- too deeply laden
Heavy hearts make heavy burden.

Quick the prow is upward borne
George in Ann's arms is thrown
Husband, wife and child together
To the chilly waves have gone.

Frenzied clasp of wife and daughter
Bears the sturdy swimmer down,
Save the boat upon the water
Nothing of their fate is known. 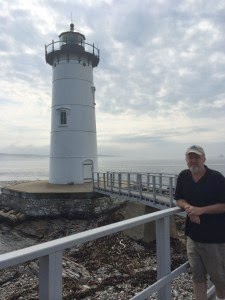 It was my pleasure being interviewed this morning by Roger Wood of New Hampshire Public Radio. We met at Portsmouth Harbor Light and we discussed upcoming events related to the lighthouse, including the current exhibit at the Portsmouth Public Library.

Click here to hear the interview.
Posted by Lighthouser at 11:03 AM No comments:

Metropolis Lighthouse: A Light of Hope

I'm stepping outside New England for this post.  A new lighthouse has been erected in Metropolis, Illinois, on the edge of the Ohio River. The purpose of this beacon is not to guide shipping on the river; it has been erected to serve as a beacon of hope to individuals and families affected by cancer.

Rudy and Beverly Bess established the Hope Light Project in July 2005 to increase cancer awareness to enable people to recognize cancer signs and symptoms, detect cancer early, take immediate action to get help and save lives.

On the morning of July 4, 2005, Rudy and Beverly learned that a family member and also a good friend died from cancer within 15 minutes of each other. This devastating news drove the couple to establish a foundation to help others learn more about how to detect, fight, and survive cancer.

The Hope Light Foundation believes that the fight against cancer begins with knowledge. With this knowledge comes empowerment to make informed decisions on personal health matters and cancer treatment options.  With empowerment comes strength that builds Hope; Hope for tomorrow, Hope for survivorship, and Hope for a cure.

"Hope Light" was lit last week.  The beacon is an ML-155 marine lantern with five-mile visibility. The light stands 30 foot tall. The project still has some work remaining, including the construction of concrete walkways and the laying of personalized paver bricks.

To learn more about the Hope Light Project and how you can donate, visit www.hopelightproject.com

Posted by Lighthouser at 10:52 AM No comments: