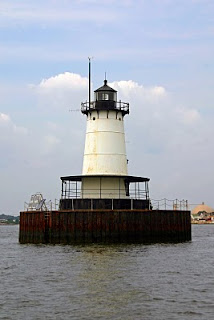 Borden Flats Light, a cast-iron caisson lighthouse built in 1881 near the mouth of the Taunton River, was offered in 2006 to any suitable nonprofit organization or community under the National Historic Lighthouse Preservation Act (NHLPA).

There were no applicants, so the property was auctioned to the general public under the guidelines of the NHLPA. It was originally sold to Michael Gabriel in 2008, and Mr. Gabriel announced plans to operate a microbrewery to produce beer inside the lighthouse. According to the GSA, Mr. Gabriel defaulted on the sale. The lighthouse was once again put up for auction earlier this year.

“I want to restore it back to what is was originally and I want to make it accessible to the public,” Korstad told a writer for the Fall River Herald News. “Beyond that, we don’t have firm plans.”

Based on my correspondence with Nick, he seems to be sincerely dedicated to the preservation of the lighthouse and to the idea of public accessibility.  I'm hopeful that this historic property is in very good hands.
Posted by Lighthouser at 2:19 PM No comments: