Incredible "Swim for the Lights" by Gary Sredzienski 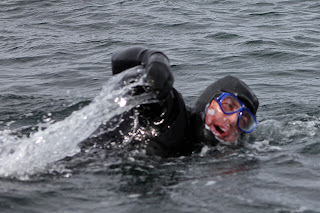 February 26, 2011, was an extraordinary day for lighthouse preservation. It was also one of the most memorable days of my life.

I had the good fortune to be in a support boat alongside Gary Sredzienski as he successfully completed his four-mile, 2.5-hour "Swim for the Lights."

I've never witnessed a display of willpower and athleticism to compare to what Gary accomplished on this day.

The conditions seemed favorable near Odiorne Point in Rye, NH, slightly before 1:30 p.m., when Gary entered the frigid waters at the mouth of the Piscataqua River and began his swim. The air temperature was about 27F, and the water was about 38F.

Gary was helped to the water by the American Lighthouse Foundation's executive director, Bob Trapani, and William Marshall, a board member of Friends of Portsmouth Harbor Lighthouses. Bob served as the primary point person on land during the swim.

Meanwhile, Friends of Portsmouth Harbor Lighthouses Chairman Ross Tracy rode along in a boat with the New Hampshire Marine Patrol. Coast Guard Station Porstmouth Harbor also provided a patrol boat for the duration of the event.

The Piscataqua, incidentally, is said to be the second fastest flowing navigable river in the United States. The swim was timed to start an hour after low tide, at a time when the current was expected to be a relatively minor factor.
The Piscataqua, however, is anything but predictable. A storm had passed by the night before and there was a stiff westerly breeze.

By the time he was a third of the way to Whaleback Lighthouse, his first intended stop about a mile and a half away, the west wind was kicking up and the seas were growing dangerously choppy. Several times, we had to yell to Gary to adjust his course as he struggled toward his objective.

I could see that Gary was expending tremendous energy during the first leg of the swim, and I started to wonder if he could draw on some sort of inner reserves to complete the route. I was worried for him. 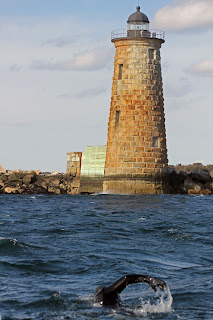 About three-quarters of the way to Whaleback, Gary came over to the boat for a quick breather, a drink of water, and a bite of banana. He was already looking drained. He said later that he expended so much energy in the early part of the swim that he stopped kicking for much of the time so he could save some leg energy for the last part.

It was Gary's aim to climb onto the rocks at Whaleback to provide a good photo opportunity. I told him repeatedly that we didn't want him doing anything to put himself in danger -- including climbing onto wet, slippery rocks. 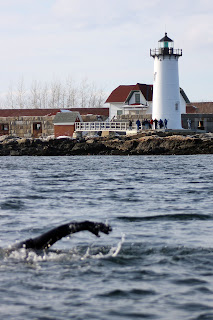 As he neared the jagged granite boulders with waves crashing against them, I hoped Gary would give up on the idea of going ashore. My boatmates, Jim Varn and Kent Allyn, laughed and said that Gary does what Gary wants to do.

Timing his access between waves, Gary clambered onto the wet rocks. He waved triumphantly and climbed up and over to the other side, out of our sight. He couldn't stay out of the water for long or he'd get too cold. By the time we got to the other side, Gary was lowering himself back into the water.

As Gary swam on toward Portsmouth Harbor Lighthouse in New Castle, NH, the wind and waves gradually subsided.

A crowd of well-wishers was waiting around the base of the lighthouse in New Castle, and they cheered as Gary got close. This time he had second thoughts about scaling the wet, seaweed-covered rocks in front of the lighthouse. As he paused near the rocks, a kayaker approached and shouted his good wishes.

Gary eventually pulled away and started the last leg of the swim toward Kittery Point. During the duration of the swim, Gary took occasional brief breaks, coming over to the boat for a quick drink of seltzer water and a bite of a banana or Powerbar. By my count, he took three of these breaks, none of them longer than a few minutes. By the last break, he was telling us to grab him so he didn't have to hang onto the boat -- he was running out of strength in his arms.

Gary's willpower pulled him on past Fort McClary to Kittery Point. As we got closer, we were thrilled to see a crowd waiting on the dock. I'm sure it warmed Gary's heart -- which was no doubt frozen by this time -- to see all the people waiting for him.


In spite of his dwindling energy, Gary had to put on a show for the audience. A couple of hundred feet away from the dock, Gary came to the side of the boat so he could don a "Creature from the Black Lagoon" mask, and he got on a boogie board to be hauled to the finish line.

As he walked up onto the boat ramp, he was handed a little red accordion as the crowd cheered.

I wondered if he would have the energy to walk up the boat ramp unassisted. He did, of course.

If all that wasn't remarkable enough, after a brief break to shower and change, Gary played a two-hour gig at a post-Swim celebration party at Captain and Patty's restaurant.

At the party, several hundred more dollars were added to the funds raised by the swim. At this writing, the donations total almost $8300 toward the goal of $10,000. You can still honor Gary's extraordinary accomplishment by donating at www.portsmouthharborlighthouse.org or www.lighthousefoundation.org


My thanks to everyone who has donated or played any role in this event. It's a day I'll never forget.

As I finish writing this, I just got an email from Gary. He's complaining that he has the "post-aqua" blues. And to think I was worried about how he might be feeling!

And I just got another message from Gary:

The Piscataqua is so humbling and is no joke. I did that [wore the mask at the end of the swim] to have fun and have fun with the cause and the people, but most of all I just want to express my respect because so many lost their lives where I was.

I believe in 1871 a Prussian lighthouse keeper of Whaleback drowned. You can feel that out there.  That was a very difficult first stretch between Rye and Whaleback and it dawned on me that it's where the water of five rivers meet the sea.

The battle between river and sea travels far inland, but that is the geographic boundary between two great forces of nature. It was such an honor for me to feel that, to be humbled by that, and I only mean respect to this river and those lighthouses.


Here's a video recapping the swim:

Posted by Lighthouser at 3:28 PM 5 comments: