Posted by Lighthouser at 5:46 PM No comments: 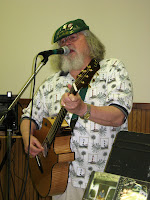 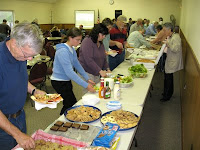 The first-ever "PizzaFest" benefit for Whaleback Lighthouse on Saturday evening, May 16, at the Kittery (Maine) Lions Club was a great success. Nearly $1700 was raised and a good time was had by all.


Pat Heffernan entertained with his Irish
music and witty storytelling. 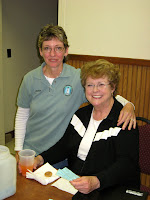 FPHL plans to commission an historic structure report of Whaleback Lighthouse at a cost of $7000. The report will serve as a guide as restoration moves forward. Full restoration is likely to run into the hundreds of thousands of dollars and could take a few years to complete. Ultimately, FPHL plans to open the tower for limited public tours, which will access the lighthouse by boat. The present difficult landing conditions will have to be improved, along with the deteriorating interior of the lighthouse, before public access becomes feasible. 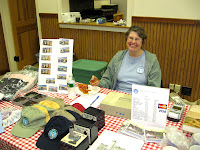 At the PizzaFest event on May 16, attendees got to enjoy pizza donated by a dozen restaurants in the area: Badger Island Pizzeria, Jitto’s, Hap’s, Darleen’s, Momma D’s, Rosa, Bread Box, Flatbread Company, Dominos, Pizza Factory, Joe’s NY Pizza, and Pizza Hut. Along with the pizza, there was salad and soda, courtesy of Shaws Supermarkets. And for dessert, there were delicious cookies and brownies made by several FPHL volunteers.

Along with the delicious food, there was foot-tapping, singalong entertainment provided by Pat Heffernan. Heffernan has been performing Irish and folk music for years, usually as one half of Shannachie. On this night, he was pressed into solo duty as his musical partner, Patrick Keane, was under the weather. Heffernan, who's also on the board of directors of FPHL, performed two lively sets that had the entire audience clapping along between bites of pizza.

Shannachie also donated CDs and a free performance for the evening's raffle. Other raffle and silent auction items included tickets to the Ogunquit Playhouse, a signed book by Jimmy Buffett, photography by John Bedard, a haircut and manicure at the DuDa Spa, lobster dinners at the Weathervane restaurant, and more. 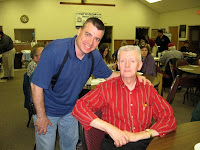 Jim Pope, one of the last Coast Guard keepers at Whaleback Lighthouse before its 1963 automation, entertained the audience with his memories of life in the offshore tower. FPHL presented Pope with a lifetime membership in recognition of his role in keeping lighthouse history alive.

It was a great night. Special thanks also to the Kittery Lions Club, gracious hosts of the event. 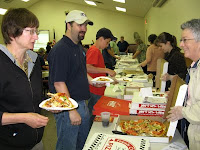 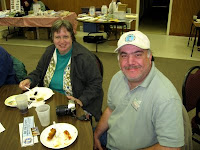 Donna and John Bedard, members of FPHL, donated original photography for the event. 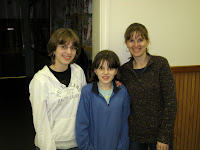 Ann Trapani, right, associate director of the American Lighthouse Foundation, volunteered at PizzaFest along with daughters Nina and Katrina.

Photos by Bob and Ann Trapani.
Posted by Lighthouser at 11:36 AM No comments: