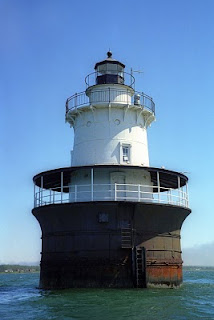 In the late 1800s, Lubec, the most northeasterly town in the United States, was an important trade and fishing port. The town later became a center of the sardine industry; it was home to 20 packing plants. The slender channel called Lubec Narrows, between Lubec and Campobello Island, New Brunswick, was dredged in the early 1880s. The Lighthouse Board urged the funding of a lighthouse at the entrance to Lubec Narrows, which would make the channel “of value to commerce at night.” Congress appropriated $40,000 for a lighthouse in the summer of 1886.

The station went into operation on December 31, 1890, with a white flash every 15 seconds shown from 61 feet above sea level. The tower was painted brown until 1903, when it was changed to white. Lubec Channel Light was a "stag" station staffed by two male keepers. The first principal keeper was Frederick W. Morong and the assistant was Loring W. Myers. The tower contained five levels, two of which were living quarters for the keepers. The lower deck was a combination living room and kitchen. The next deck was a bedroom.

Loring W. Myers, formerly a steamboat captain, advanced to principal keeper in 1898 and was in charge until 1923. Myers moonlighted as an entrepreneur and inventor; he dabbled in real estate and owned a sardine packing plant.

Myers was credited with many lives saved during his long career. Once, a group of young women was passing by in a motor vessel when the boat caught fire. Myers rushed to the scene and rescued all the women, who were described as hysterical. On another occasion, the keeper saved two men whose boat had capsized near the shore of Campobello. The men were clinging to fishing weir stakes when Myers reached them.

Elson Small, who went on to a 28-year career at several stations, became the assistant keeper in November 1920, weeks before he married Loring Myers’s niece, Constance “Connie” Scovill. Myers and Small alternated two-day stays at the lighthouse.

Click here to listen to Connie Small's description of the interior of Lubec Channel Lighthouse, from a 1997 interview.

An assistant keeper, Nathaniel Alley, was alone on duty one day in 1939 when he was overcome by gas from the coal stove. The captain of the Grand Manan ferry, which ran regularly through the area, was accustomed to hailing the man on duty. When no one appeared, the captain became suspicious. Nathaniel Alley was found and taken to Lubec for medical treatment, but he soon died. The light was automated a short time later, with the installation of an acetylene gas system and a sun valve.

In 2006, the lighthouse was made available to a suitable new steward under the guidelines of the National Historic Lighthouse Preservation Act of 2000. There were no applicants, so in July 2007 it was auctioned to Gary Zaremba for a high bid of $46,000. You can read more about him here.

Posted by Lighthouser at 12:30 PM No comments: