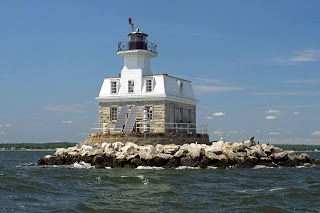 On December 22, 1916, Keeper Fred A. Jordan left the lighthouse at twenty minutes past noon to row ashore. There were high seas and strong winds, but the keeper badly wanted to join his family for Christmas and to give his hand-made presents to his children. Assistant Keeper Rudolph Iten watched from the lighthouse as Jordan pushed his boat through the waves. About a hundred yards from the lighthouse, Jordan’s boat capsized.

He clung to the boat and signaled for Iten to lower the station’s remaining boat and come to his aid. Iten tried valiantly to do this, but the steadily increasing waves and wind made it impossible to launch the boat. He finally got underway about 1 p.m., but by that time Jordan had drifted a mile and a half to the southwest. Iten said later:

"I did my level best to reach him, but I hadn’t pulled more than half a mile when the wind changed to the southwest, making a head-wind and an outgoing tide, against which I couldn’t move the heavy boat. I had to give up, and returned to the station in a regular gale. From the station I sent distress signals to passing ships, but none answered. At three o’clock I lost sight of the drifting boat. The poor fellow’s body wasn’t found until three months later. He was a fine fellow, was Fred."

Iten was absolved of any blame for Jordan’s death. He was promoted to head keeper and would remain for more than a decade. A few years later another writer visited Iten, and a conversation in the wee hours of the morning turned decidedly macabre.

“They say that all lighthouse keepers are mad,” said Iten as a preface to the following chilling tale, told against the background of the whispering wind and the gentle wash of the waves.

"You ask if there has ever been anything in the nature of a supernatural occurrence at this lighthouse. Well, all light keepers are more or less hard-boiled and not given over to stretches of imagination. While I don’t deny or admit the theory of ghosts, something happened here one night that seemed to point to the establishment of the fact that there are such things as supernatural visitations."

"Some days later on what was one of the worst nights in the history of Penfield, and the waves were dashing over the lantern, I was awakened – I was off duty – by a strange feeling that someone was in my room. Sitting up I distinctly saw a gray, phosphorescent figure emerging from the room formerly occupied by Fred Jordan. It hovered at the top of the stairs, and then disappeared in the darkness below. Thinking it was the assistant keeper I called to know if anything was the matter, but he answered me from the lens room that all was well.

"Much puzzled, I went downstairs and to my consternation I saw lying on the table the log-book of the lighthouse, with the page recording the drowning of Poor Jordan staring me in the face!

"This is the only time the book has been taken from its place by other hands than mine or my assistants, and as to how it got on the table and lay open with the entry about Jordan will always remain a mystery to us here. I have seen the semblance of the figure several times since and so have the others, and we are all prepared to take an affidavit to that effect. Something comes here, that we are positive. There is an old saying, ‘What the Reef takes, the Reef will give back.’ Poor Jordan’s body was recovered not long after his drowning, and in the pocket of his coat was found a note addressed to me – which he probably forgot to leave before he started on his fateful ride in that rough sea – instructing me to complete the entries of that morning – the day he died – as they were not brought up to date."

An undated article in the Bridgeport Public Library claims that, on stormy nights, “the specter of the 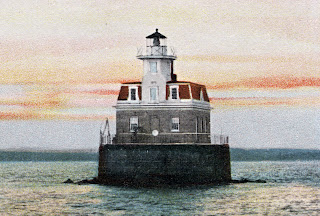 reef is said to be flitting among the rocks, poised on the rail of the gallery that surrounds the lantern or swaying, as if in agony, among the black and jagged rocks that surround the base of the light.” The article tells the story of a power yacht that ran into trouble on the rocks but was “piloted through the breakers to safety by a strange man who suddenly appeared amid the surf creaming over the rocks… in a row-boat.”

And then there were the two boys who were fishing near the reef when their canoe capsized, throwing them into the sea. A man appeared “from out of the rocks” and pulled them to safety. When they came to, they entered the lighthouse expecting to thank their savior, but he was nowhere to be found.
Posted by Lighthouser at 12:15 PM No comments:

I'll be doing some commentary aboard this cruise on November 7. Space is limited -- make your reservations now!

NORWALK, CT – Venture out on Sat., Nov. 7 for a rare close-up look at five historic lighthouses on Long Island Sound during a Maritime Aquarium Lighthouse Cruise, a new boat outing offered at The Maritime Aquarium at Norwalk.

“As we see firsthand with our annual Festival of Lighthouses Contest, people have a special fondness for lighthouses,” said Tom Naiman, the Aquarium’s director of education. “There’s a respect there for the role that lighthouses play in our maritime history, and an appreciation for the different ways that they were designed and built. These cruises are a great chance to see these unique structures up close and from the water.”

All the lighthouses are on the National Register of Historic Places. Aquarium educators will offer details, histories, and anecdotes about the lighthouses, and also – since they’re in view – point out the Sound’s visiting winter waterfowl. Binoculars will be provided.