The sole federal lighthouse keeper in the U.S., Sally Snowman, is speaking at the first day of issue ceremony for the new Boston Harbor Lighthouse Forever stamp. The event is free and open to the public. 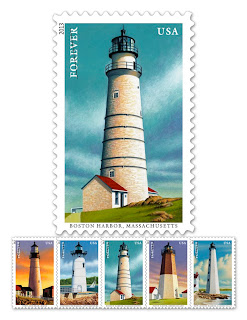 DETAILS: The Postal Service is holding five simultaneous ceremonies on July 13 in five different states for the issuance of five New England Coastal Lighthouse Forever Stamps. In addition to the Boston Harbor Lighthouse in Massachusetts, the featured lighthouses include: Portland Head in Maine, Portsmouth Harbor in New Hampshire, Point Judith in Rhode Island, and New London Harbor in Connecticut. Take a video tour of the lighthouses at: about.usps.com/news/events-calendar/ne-lighthouses/welcome.htm

Boston Harbor Light, North America’s first true light station, was built in 1716. Three years later a cannon—America’s first fog signal—was added to the light station. During the Revolutionary War, as British forces abandoned the area in 1776, they demolished the lighthouse by blowing it up. A new rubblestone tower, 75-feet tall, replaced the destroyed lighthouse in 1783; it was raised an additional 14 feet in 1859, when its current second-order Fresnel lens was also installed. After large cracks appeared in the east wall in 1809, iron hoops were installed for support; aluminum bands replaced the corroded iron in 1973–74. The lighthouse was designated a National Historic Landmark in 1964. Standing on Little Brewster Island within the Boston Harbor Islands National Recreational Area, it was the last lighthouse in the United States to be automated—in 1998—and is the only remaining American lighthouse to have a resident keeper employed by the federal government. Customers may purchase the New England Coastal Lighthouses Forever stamps at usps.com/stamps, at 800-STAMP-24 (800-782-6724) and at Post Offices nationwide on July 13.
Posted by Lighthouser at 9:32 AM 1 comment: