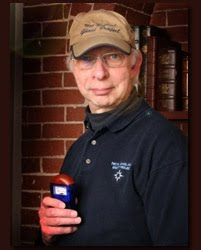 Join Ron Kolek of the New England Ghost Project and Jeremy D'Entremont of New England Lighthouse Tours for a unique evening cruise, leaving Rye Harbor, New Hampshire, aboard the M/V Granite State at 7:00 p.m. on July 31, 2010. The cruise will return to the dock at 10:00 p.m.

The cruise will pass close to three lighthouses: Portsmouth Harbor, Whaleback, and White Island, as well as the Isles of Shoals and other points of interest. You'll learn about the ghostly Woman in White who warns of approaching storms at White Island, the longtime keeper who haunts Portsmouth Harbor Lighthouse, and much more. You'll hear first-hand accounts of paranormal investigations by New England Ghost Project.

Ron Kolek is the founder and lead investigator of the New England Ghost Project. With a degree in environmental science, he was the ultimate skeptic. A near death experience changed all that. No longer blinded by his skepticism, he now uses his scientific background to seek the truth about the paranormal. In addition to hosting Ghost Chronicles on Ghostvillage Radio and ITunes, he hosts a weekly internet radio show on Toginet.com, and writes monthly paranormal newspaper columns in the Stateline Review and Food and Spirits.

He is the co-author, with Maureen Wood, of the best-selling book The Ghost Chronicles: A Medium and a Paranormal Scientist Investigate 17 True Hauntings.

Click here for tickets!
Posted by Lighthouser at 9:30 AM No comments:

OK, this was an excuse to show a photo with some flowers before winter really sets in.
Posted by Lighthouser at 7:21 AM No comments: