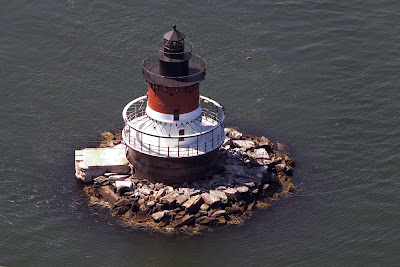 The Friends of Plum Beach Lighthouse, deed holders for the historic lighthouse located beneath the Jamestown Bridge in North Kingstown, Rhode Island, are pleased to announce the passage of legislation allowing the group to sell Plum Beach Lighthouse license plates to interested Rhode Island registered passenger vehicle owners. To celebrate, the group is offering media and other interested parties the rare opportunity to tour the lighthouse on Thursday, November 12.

On October 29, during the special fall legislative session, the state Senate approved their version of the House bill that had been passed during the regular session. After a short grace period, the bill becomes law and the Friends welcome local media and other guests on a tour of the lighthouse to celebrate the passage of the PBL license plate bill. On the day of the tour, the bill, because it was passed by both legislative branches, automatically becomes law without the Governor’s signature, making the lighthouse trip a special day for the Friends of Plum Beach Lighthouse.

The lighthouse was opened in 1899 to protect vessels from the Plum Beach shoal. Active for only 42 years, the lighthouse was abandoned in 1941 by the Coast Guard after the opening of the original Jamestown Bridge in 1939. The structure deteriorated for 62 years until the Friends, with the help of a RI Department of Transportation grant, renovated it in 2003. Now, a short six years later, the lighthouse is once again in need of a painting. The Friends have tried to raise funds for the past six years and have now turned to the General Assembly, the Division of Motor Vehicles, and the general driving public for help.

The proposed specialty plate will cost drivers a one-time fee of $41.50. $20 from each plate fee collected will go directly to the painting project to help cover the $50,000 estimated painting cost. The state General Fund will benefit from the other $21.50 of each plate sold after the plate costs are deducted. The Friends will need to sell 900 plates before the DMV will commit to making any, but the group is confident they will quickly reach this number. They have already compiled a list of over 450 “pre-orders” from interested drivers, and this was done before the group had the right to sell the plate. Now that the General Assembly has approved the group’s request to create the plate, the Friends can now truly offer this unique RI plate design.

The group assembling at the town dock at 8 a.m. on November 12 will board the 50-foot certified passenger vessel Sea Princess of Wickford. Piloted by Coast Guard licensed Captain Doug Somers, the vessel will motor out of Wickford Harbor, turn south outside the harbor breakwater, and travel approximately three miles to the lighthouse beneath the Jamestown-Verrazzanno Bridge. The Sea Princess will circle the lighthouse several times for a photo-op before rafting to the “Lightship,” a 26-foot aluminum-hulled landing craft with a retractable bow piloted by Coast Guard licensed Capt. Keith Lescarbeau, the contractor of the 2003 lighthouse renovation. The group will transfer from the Sea Princess to the Lightship to make their way across the rocks to the lighthouse.

The Friends want to stress the danger and difficulty of this adventure. Very few have ever visited the property as it sits in some of the most treacherous waters of Narragansett Bay. Of the 90 official members of the Friends of Plum Beach Lighthouse, few have ever visited; at the most, only six current members have ever set foot there. It is surrounded by seaweed and moss covered rocks that become slick as ice when wet, which is most of the time. Once you have cleared these rocks, one must be capable of climbing fifteen feet up a ladder and through an opening no larger than two feet wide. Heavyset overweight people will have a difficult time making their way through this opening.

Proper outdoor waterproof clothing and proper shoes are required for the visit to the lighthouse. If one should slip on the rocks you must expect to get wet or dirty from the growth. Once in the lighthouse the interior walls are rust covered and the floors are dusty. Although the guano was abated during the 2003 renovation, the pungent smell from the years of being inhabited by generations of pigeons and cormorants is ever present. However, the views from the lower deck and the upper lantern room are spectacular and well worth the trip.

The decision to access the lighthouse property will be made jointly by Captains Somers and Lescarbeau. Sea conditions vary greatly from inside Wickford Harbor to the Plum Beach shoal, and the lighthouse is situated in water that has some of the strongest current on the bay. There is no guarantee that the group will make a landing at the lighthouse, but the best effort will be made to get everyone onto the property. Failing to make the landing won’t deem the trip a failure because there will be opportunity to get plenty of great, close visuals from the Sea Princess of the lighthouse.

Don’t miss out on this rare opportunity to visit this RI historic icon. Space is limited to 40 on the Sea Princess, so please reserve your reporter and photographer’s spot now. The Friends expect it to be a full ship. This is an extremely rare event and will not be repeated any time soon.

Posted by Lighthouser at 10:51 AM No comments: