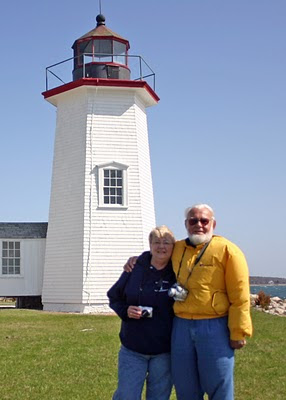 On their wedding trip in 1987, Bob and Sandra Shanklin visited a few lighthouses in Maine. The "lighthouse bug" took serious hold, and they soon developed an obsession to visit every lighthouse in the United States. They eventually succeeded in that quest. The Shanklins have truly earned the nickname, "The Lighthouse People."

Recently, the Shanklins embarked on a mission to digitally scan thousands of photos at the Coast Guard Historian's Office, so that the scans can be shared with lighthouse researchers everywhere. You can read about that project here.

They've accomplished a great deal and they've inspired lighthouse buffs to follow in their footsteps. Most importantly, Bob and Sandra are genuinely nice people.

Bob turns 85 on Friday, July 16. You can wish him a happy birthday via email -- the address is TheLighthousePeople@hotmail.com.

Photo: Bob and Sandra Shanklin at Wings Neck Lighthouse on Cape Cod in 2004.
Posted by Lighthouser at 7:08 PM No comments:

The restoration of Maine's Owls Head Lighthouse will soon be complete and the tower open once again to the visiting public. In preparation for this exciting moment, you might say work crews were busy during the month of June preparing a “red carpet” welcome inside the lighthouse for future visitors.

Click here to read the whole story by Bob Trapani of the American Lighthouse Foundation.

Posted by Lighthouser at 10:28 AM No comments: