New London Ledge is one of the coolest lighthouses anywhere, in my humble opinion. Not only is it architecturally beautiful and unique, but it's haunted to boot! What more could you want?

Posted by Lighthouser at 9:14 AM No comments: 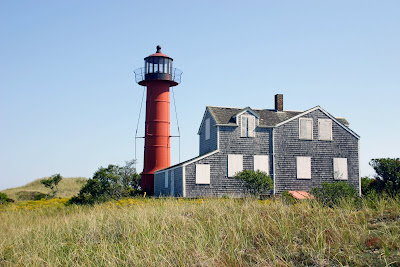 $1.5 million in 2009 American Recovery and Reinvestment Act funds will be used to restore the isolated Monomoy Lighthouse, off Chatham on Cape Cod, Massachusetts. The 1849 lighthouse has been in the care of the U.S. Fish and Wildlife Service (USFWS) since 1977, as part of the 2,750-acre Monomoy National Wildlife Refuge.

Monomoy was first separated from the mainland around 1800, but it was later rejoined. It was separated again by winter storms in 1958. The ferocious blizzard of February 6-7, 1978, cut Monomoy into two islands, North and South Monomoy. The ever-shifting contours of South Monomoy have left acres of sand between the lighthouse and the shore, leading some to liken it to a “minaret in the Sahara.”

In 1988, the USFWS hired K&K Painting of Baltimore to carry out a major overhaul of the 40-foot-tall cast-iron lighthouse and keeper’s house. The work was funded mostly by money left over from the rebuilding of Great Point Light on Nantucket, funneled to Monomoy with the help of Massachusetts Senator Edward M. Kennedy. The buildings were again in rough shape by 2001, when a new effort at rehabilitation was announced. Because of a lack of funding and the remote location, however, only minor repairs have been completed.

The new restoration project is one of at least four lighthouse upgrades across the U.S. funded by Recovery Act money. The others are Roanoke River (NC), Jupiter Inlet (FL), and Fire Island (NY). The funding for Monomoy is the largest of the four.

Oak Point Associates has been hired to assess what's needed, and their report will be finished in the next few weeks. The contract should go out for bid in the early part of 2010.

The present lighthouse at Monomoy was among the first cast-iron lighthouses in the United States; towers at Boston's Long Island Head (1844) and Vermont's Juniper Island (1846) were among the earlier ones. Among surviving American towers of this type, only Juniper Island’s and one at Biloxi, Mississippi (1848) are older.

Capt. Keith Lincoln offers a variety of cruises on the Monomoy Island Ferry, including a visit to South Monomoy and the lighthouse. See www.monomoyislandferry.com.
Posted by Lighthouser at 8:51 AM 2 comments:

The setting for the story is of course, Burnt Island. The book contains a vocabulary section to help readers understand the terms associated with lighthouses. The book is being printed right now and will be available in a couple of weeks, just in time for Christmas. You can visit Bob’s website for a sneak preview at www.percivallighthousemouse.com.
Posted by Lighthouser at 7:46 AM No comments: