Sunset Cruise and Cocktail Party with Most Haunted's Richard Felix

Join Ron Kolek and Maureen Wood of the New England Ghost Project and special guest Richard Felix, historian/folklorist of TV's "Most Haunted," for a sunset tour on the Piscataqua River, followed by a fun get-together at Portsmouth's Rusty Hammer restaurant.

Following the cruise, all aboard will head to the Rusty Hammer restaurant, just a few blocks away. Hors d'oeuvres will be served, and there will be a cash bar. Richard Felix will share some of his experiences as one of the most respected paranormal investigators in the world today.

Richard Felix, who was born in 1949 in Stanley, Derbyshire, England, came to prominence as the historian on the widely popular TV show "Most Haunted." He left the show in 2006 to pursue new projects. He has produced a series of successful paranormal-themed DVDs and has written several popular books. He is married with two children and still lives in Derbyshire. For more information, visit www.felixfilms.net.

You can buy tickets at www.newenglandlighthousetours.com

Posted by Lighthouser at 4:54 PM No comments: 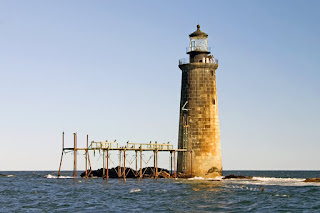 Click here for ticket info!
Posted by Lighthouser at 8:38 AM No comments: