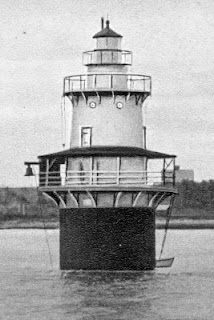 Maine has been luckier than many coastal states; only a handful of its 65+ lighthouses have been lost over the years. One of the most prominent of Maine’s lost lights was Crabtree Ledge Light, which stood offshore at the entrance to Sullivan Harbor from 1890 to 1950. Named for a prominent local family, Crabtree Ledge Lighthouse is still fondly remembered by older residents of the vicinity.

The following is a condensed version of the chapter on Crabtree Ledge Light from my new book, The Lighthouses of Maine (2009, Commonweath Editions). I’ve also added some new material from an article recently sent to me by lighthouse historian Ted Panayotoff. The article by Donna Gronros concerns the memories of her Aunt Dot, whose grandfather was the first keeper at Crabtree Ledge.

By 1886, various steamers were making 15 to 20 runs daily in summer between Sullivan Harbor and the popular resort of Bar Harbor. There were also many vessels carrying lumber and granite passing through the area. Crabtree Ledge, a dangerous obstruction about a mile from Hancock Point at the entrance to Sullivan Harbor from Frenchman Bay, suddenly assumed new importance. Funds for a light and fog signal at the ledge were appropriated by Congress on August 4, 1886.

Work began in 1889, when a cast-iron cylindrical caisson, 25 feet in diameter and 32 feet tall, was put into position on the ledge, in a spot 15 feet below sea level. After the caisson was filled with concrete, it was surmounted by the cast-iron lighthouse superstructure, 37 feet tall from the base to the center of the light. A fifth-order Fresnel lens showing a fixed white light, interrupted by a more intense flash every two minutes, went into service on January 15, 1890. A 1,200-pound bell and striking machinery were installed in 1891.

The first keeper was Charles Chester, a native of Philadelphia who had been a cabin boy at age 11 and the captain of his own ship at 19. He and his wife, Mary (Blake), eventually had 11 children, the last five of whom were born in a house at Hancock Point. Chester remained in charge at Crabtree Ledge until 1908. One of the Chesters’ granddaughters, Dot, who was born in 1903, later described her memories of the lighthouse:

As the lighthouse was a cylinder, all the rooms were round. The kitchen and living room were on the second level. The third level was the bedroom. Above that was the lantern deck. The lowest deck was the basement, where rainwater from the 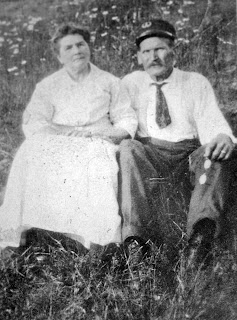 roof was caught in a cistern and provided the water supply. Coal was also stored there.

Most of Grandpa’s nights were spent in the lighthouse, although the house on the mainland was located so the bedroom window faced the light so he could see that all was well. If the light went out, as it sometimes did, Grandpa would dress quickly, rush down to the little boat and row out to the light. If there was a smokeout, everything would be all covered with soot and it would take all day to clean it up.

Chester Brinkworth of Hancock Point served as an assistant keeper beginning in 1914. In the fall of 1916, Chester’s younger brother, Leon, filled in as a temporary assistant while the principal keeper, Jerome Peaseley, was on shore recovering from pneumonia.

In late September, 18-year-old Leon Brinkworth returned from a trip to shore. According to some accounts, as he climbed the ladder on the side of the lighthouse with provisions in his arms, he slipped and plunged into the water. Other accounts report that the younger brother’s boat capsized. In either case, Chester, 35 years old, quickly dove into the water in a valiant but vain attempt to save his brother.

Both of the Brinkworth brothers drowned in the lighthouse’s worst tragedy. A reporter for the Kennebec Journal wrote of the Brinkworths, “Both were bright, able, and highly esteemed young men and their tragic death has brought shock and grief to friends and associates.” Another assistant keeper, Joseph Whitmore, also drowned just six months later.

The lighthouse was discontinued in 1933, the same year local ferry service ended. The father of Newbold Noyes, editor of the Washington Star, subsequently bought the lighthouse for a reported $115. Noyes gave the lighthouse to his three sons as a gift. The sons sold the lighthouse in 1937 to a friend, Fritz Allis, who summered at Hancock Point. Allis and some friends moved a reed organ into the lighthouse.

When Allis married Tiense Gummere, the two spent their honeymoon at the lighthouse; they were subsequently marooned there for several days during stormy weather. He never returned after that, and the lighthouse fell into poor condition until it finally collapsed into the bay in a winter storm in February 1950.
Posted by Lighthouser at 10:21 AM No comments: