Lighting of the Nubble Today! 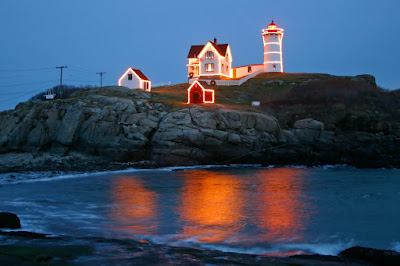 Festivities get underway at 5:00 p.m. at Sohier Park with entertainment including the York High School Chamber Singers. The event includes traditional Christmas melodies along with kiddie carols - something for the whole family. The United Divers of New Hampshire will raise the lighted tree from the ocean, and there will be a visit from Santa, who arrives by way of a York Beach Fire Dept. ladder truck.

At the proper time, everyone will count down the seconds before the lighthouse is lit in its holiday glory. holiday lights. There's plenty of hot chocolate and cookies for all.

A COMPLIMENTARY SHUTTLE SERVICE IS AVAILABLE FROM ELLIS PARK AT SHORT SANDS BEACH FROM 3:30 P.M. - 7:00 P.M
Posted by Lighthouser at 11:26 AM 1 comment: 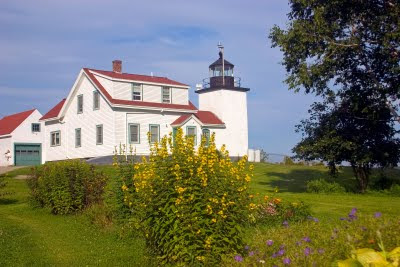 In the 1800s, the peaceful town of Stockton Springs was a lumber port and a shipping point for Maine’s potato industry. Cape Jellison, a triangular wedge of land about two miles long, occupies the southern portion of the town. At the eastern corner of Cape Jellison is Fort Point, which juts far out far into the west side of the entrance to the Penobscot River. The point gets its name from adjacent Fort Pownall, built by order of Massachusetts Royal Governor Thomas Pownall (Maine at that time was part of Massachusetts) in 1759 to guard against the French.

As Bucksport and Bangor—located on the Penobscot River to the north—flourished as important lumber ports, Congress recognized the need for a lighthouse at Fort Point. The first lighthouse, 24 feet tall to the lantern deck, went into service in 1836. It was Maine’s first light station on a river. The initial keeper was William Clewley, who had sold his land to the government for the station.

In 1855, while the master mariner John Odom was keeper, the Lighthouse Board called the station “entirely worn out” and recommended that it be rebuilt. After a $5,000 appropriation in August 1856, a new tower and dwelling were built. The work was completed in 1857 and a fourth-order lens replaced the old multiple lamps and reflectors. The 31-foot-tall square brick tower is attached to the two-story, wood-frame keeper’s dwelling. The lighthouse’s lantern was replaced in 1868.

Arthur B. Mitchell, who was born in Cambridge, Massachusetts, in 1879, went to sea as a young man and eventually became the captain of the two-masted schooner George W. Collins. When he married his wife, Elizabeth, in 1908, the two sailed the schooner to Duxbury, Massachusetts, for their honeymoon.

Mitchell’s experience before he arrived at Fort Point included several years at the isolated Matinicus Rock Light Station. His era at Fort Point encompassed the installation of an incandescent oil vapor lamp in 1935; Mitchell said it made more light but also more work.

Mitchell once made the newspapers when a weather prediction turned out to be nearly on target. At the start of the winter of 1937–38, Mitchell predicted the unusually high total of 38 storms. A brief news item in May 1938 confirmed that there had been 35 such storms, and Mitchell was “waiting anxiously for three more snowstorms.”

Mitchell’s grandson, Arthur Curtis, spent a good deal of time at the light station as a boy. One morning, he raised the American flag in an effort to help out. Later in the day, his grandfather got a call from Bangor asking what was wrong at the station. Young Arthur had accidentally raised the flag upside down, a universal signal of distress. A person on a passing ship had reported the signal.

Fort Point was long a regular destination of New England’s “Flying Santa,” who dropped Christmas presents from a plane for lighthouse keepers and their families. In a 1932 letter printed in the Rockland Courier-Gazette, Mitchell expressed his gratitude to Bill Wincapaw, who started the flights in 1929. “Our dog was the first to hear the sound of the motor,” Mitchell wrote, “and then we all rushed out in time to see the plane circle over the reservation and go sailing down over the Penobscot again. We all join in wishing you and yours the happiest New Year ever.”

Shortly before Mitchell retired, his wife was quoted in the Maine Sunday Telegram: “We never really felt cut off here because we have the telephone, radio and books. We have mail service now and during the winter the town keepers the road plowed out so we are never snowed in for very long.”

Keeping an eye on the lighthouse and fort, giving impromptu tours, and maintaining all of the buildings keeps Cole busy in summers. In the off-season, he also works as the archivist in charge of special collections at the Belfast Public Library. He enjoys historic research and has documented much of the light station’s history.

The Coast Guard maintains the active light and automatic fog signal; the fourth-order Fresnel lens remains in service. There are signs on U.S. Route 1 in Stockton Springs pointing the way to 120-acre Fort Point State Park and the lighthouse, and a 200-foot pier is available for visitors arriving by boat.

For photo prints, see www.shutterfly.com/pro/dentremont/mainelighthouses/FortPoint
Posted by Lighthouser at 9:06 AM 2 comments:

Photo of the Day: Whaleback in a Storm Whaleback in a Storm, originally uploaded by nelights.

As I sit hear listening to the wind howling outside today, it seems like a good idea to make this the photo of the day.

This photo of Whaleback Lighthouse in Kittery, Maine, was taken at high tide during a storm on April 16, 2007. The lighthouse is over 60 feet tall. This photo was taken from Great Island Common in New Castle, New Hampshire. The image is grainy because the visibility was very bad during the storm; it was raining heavily.

Posted by Lighthouser at 9:04 AM No comments: