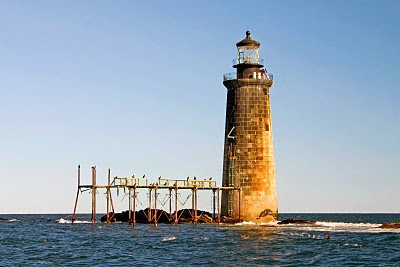 I've just received the press release below from Bob Muller of the Ram Island Ledge Lighthouse Community. He's trying to acquire Ram Island Ledge Lighthouse off Cape Elizabeth, Maine, and he has a unique approach that could allow thousands of people to share in its ownership. The lighthouse is currently being auctioned under the guidelines of the National Historic Lighthouse Preservation Act of 2000. As of today, the high bid is $30,000. Final bids must be made by September 2.


SOCIAL NETWORK COMMUNITY PROJECT TO PRESERVE HISTORIC RAM ISLAND LEDGE LIGHT HOUSE
Unique People’s Option Versus Private Ownership
August 30, 2010, Brunswick, ME – “We Can Keep The Beacon Burning” is the chant of the Ram Island Lighthouse Community which just launched a social networking project to preserve Ram Island Ledge Lighthouse. They’re aiming to be the highest bidder to acquire the lighthouse one mile offshore from Portland, Maine, as a “people’s option.” With a precious few 12 days to final bid, the Ram Island Lighthouse Community’s goal is to rapidly assemble a worldwide community of individuals finding charm in the ownership of a lighthouse, but never able to afford it as individuals. “Every kid and most adults would love to own a lighthouse?” says the Community Executive Director, Robert Muller. “Lighthouses have such a stoic, strong and gorgeous allure – a romantic icon standing in some of the most beautiful settings in nature.”

By creating a community of owners contributing $49 each for a ‘Keeper of the Lighthouse Membership Deed,’ the organization hopes to win the bid. Mr. Muller described the socially networked community as “a compelling people’s option to other potential purchasers from CT, NY and who knows where with different intentions to keep it in totally private hands. By joining our community with membership deed purchases, collectively the public will determine if our cooperative people’s model is a winner and gets the bid.”

This for-profit preservation model offers a unique twist where the members collectively assist in making the decisions through a voting process of how best to operate the lighthouse for the future. Muller continued, “We hope to crowd source ideas, especially how we want to sensorize the lighthouse with web, audio, weather, and other high tech equipment so people can actually experience the light through the internet.”

Mr. Muller has set up a corporate escrow account with Bath Savings Institute but needs to find a qualified agent for it.  If the bid is not won, escrow funds are either refunded or members vote to donate the funds to non-profits. The website is http://www.ramislandlighthouse.com to learn more.

The lighthouse, operating since 1905, has been put up for auction bid by the United States Coast Guard. It has major historical and navigation importance to the maritime community. Still a valued aid to navigation, the Coast Guard will continue to serve its navigational operation while the winning bidder will maintain the property under National Historic Registry Guidelines.

About The Ram Island Ledge Lighthouse Community:
An innovative for-profit preservation and conservation organization, it brings together socially networked communities of common interest to own, protect and steward treasured lands and sites of historical and cultural significance. Community members adopt an active voice through an interactive online presence and through persistent live internet feeds. Members together help determine the future of a property and build shared knowledge and experiences about all aspects including ecology, history, culture and local economy.


###
If you would like more information or to schedule an interview with Robert Muller, please contact him at +1 (207) 956-0699 or bmuller@RamIslandLighthouse.com
Posted by Lighthouser at 12:10 PM No comments: 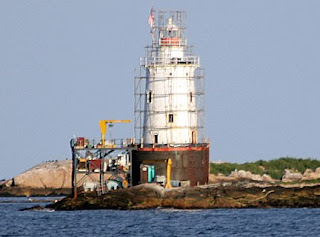 Rhode Island's Sakonnet Lighthouse is one of the most dramatic wave-swept towers in New England. It barely escaped destruction in the great hurricane of 1938, and it's taken a pounding in many coastal storms since it was built in 1884.

In January 2006, the nonproft Friends of Sakonnet Lighthouse received word that the group's application for $844,323 from the federal Transportation Enhancement Program had been approved. Along with bolt replacement, patching, and painting, there are plans to install better boat landing facilities at the lighthouse. The group has also privately raised close to $200,000 for restoration.

I received the following information in March 2009 from architect Deane Rykerson, based on a presentation given by John Wathne, a structural engineer and principal with Structures North Consulting Engineers of Salem, Mass.:


The structure is a cast-iron drum with an interior lining of brick. The structure tapers with thick flanged iron sheets engaging masonry. Although this is not truly a structural composite, the iron and brick interlock in such a way that one cannot move without the other moving. Brick growth, natural cement mortar harder than the bricks of the liner, and corrosion jacking on the inner faces and joints of the iron sheets, work together to announce the lighthouse's deterioration as a "paint problem" to passing recreation boaters. The primary problem with corrosion, and the primary consequence of paint failure, occurs at the joints of the panels of the drum, which are bolted but not welded and no longer watertight on the exterior.

Structures North decided to tear out the existing brick liner in vertical "lifts," dropping it into the void of the caisson below. This avoids the costs and environmental issues of disposal of the brick at this off-shore site. The cast-iron will be shot blasted on both sides then painted with a 3-part paint system (zinc-rich primer, epoxy, and polyurethane top coat). New brick will be brought to the site to replace the ruined liner.  John is full of admiration for his client group who has stayed with the project enthusiastically - even as its complications unfolded.

The contract for restoration was awarded in March 2010 to the Joseph Gnazzo Company of Union, Connecticut. Work began earlier this summer, and at this writing it's hoped the project will be completed by sometime in the fall. As part of the project, all the rust is being hydroblasted the rust off the tower's iron plates. All the rusted cast-iron bolts will be replaced by new stainless steel bolts. All the plates will be primed and painted.

I'm looking forward to seeing a gleaming, restored lighthouse in 2011!
Posted by Lighthouser at 6:20 AM 3 comments: