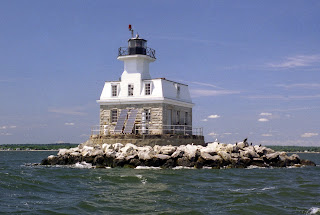 The shoal that extends more than a mile from Penfield Beach in Fairfield was long a scourge to mariners traveling by on Long Island Sound or heading to the harbors at Black Rock and Bridgeport. Tradition holds that this was once solid land that supported the pasturing of cattle, hence the names “Cows” and “Calves” for two prominent rocky parts of the shoal.

A 28-foot-square dwelling with a mansard roof was built centrally on a granite pier. The second floor originally contained four bedrooms, while the first consisted of a kitchen, living room and oil room. The second story and light tower are of wood-frame construction and the tower at the watchroom level is octagonal. Above that is an octagonal cast-iron lantern, which originally held a fourth-order Fresnel lens. A flashing red light was exhibited, 51 feet above sea level. The light went into service on January 16, 1874.

Many keepers and assistants remained only a year or two at the offshore station. Neil Martin, formerly at Race Rock and Stamford Harbor, was keeper from 1882 to 1891. His wife Jane served as an assistant keeper during some of that time. Jane Martin died in March of 1886, and Keeper Martin received a letter from the Lighthouse Depot in Tompkinsville, NY, coldly informing him, “Find a competent man to take your place, and then leave of absence to attend the burial of your wife is hereby granted you.”

The saddest incident in the lighthouse’s history took place three decades later. On December 22, 1916, Keeper Fred A. Jordan (sometimes spelled Jordon) left the lighthouse at twenty minutes past noon to row ashore. There were high seas and strong winds, but the keeper badly wanted to join his family for Christmas and to give his hand-made presents to his children. Assistant Keeper Rudolph Iten watched from the lighthouse as Jordan pushed his boat through the waves.

About a hundred yards from the lighthouse, Jordan’s boat capsized. He clung to the boat and signaled for Iten to lower the station’s remaining boat and come to his aid. Iten tried valiantly to do this, but the steadily increasing waves and wind made it impossible to launch the boat. He finally got underway about 1 p.m., but by that time Jordan had drifted a mile and a half to the southwest. Iten said later:

I did my level best to reach him, but I hadn’t pulled more than half a mile when the wind changed to the southwest, making a head-wind and an outgoing tide, against which I couldn’t move the heavy boat. I had to give up, and returned to the station in a regular gale. From the station I sent distress signals to passing ships, but none answered. At three o’clock I lost sight of the drifting boat. The poor fellow’s body wasn’t found until three months later. He was a fine fellow, was Fred.

Iten was absolved of any blame for Jordan’s death. He was promoted to head keeper and would remain for more than a decade. In 1922, a writer asked Assistant Keeper Arthur Bender how the men dealt with the ice on the station in winter. Bender explained that they sprinkled ashes wherever they walked outside on the station to avoid sliding right into Long Island Sound. For heat, the lighthouse had three stoves, with eight tons of coal and three cords of wood for winter fuel.

A few years later another writer visited Keeper Iten and a conversation in the wee hours of the morning turned decidedly macabre. “They say that all lighthouse keepers are mad,” said Iten as a preface to the following chilling tale, told against the background of the whispering wind and the gentle wash of the waves.

You ask if there has ever been anything in the nature of a supernatural occurrence at this lighthouse. Well, all light keepers are more or less hard-boiled and not given over to stretches of imagination. While I don’t deny or admit the theory of ghosts, something happened here one night that seemed to point to the establishment of the fact that there are such things as supernatural visitations.

Some days later on what was one of the worst nights in the history of Penfield, and the waves were dashing over the lantern, I was awakened – I was off duty – by a strange feeling that someone was in my room. Sitting up I distinctly saw a gray, phosphorescent figure emerging from the room formerly occupied by Fred Jordan. It hovered at the top of the stairs, and then disappeared in the darkness below. Thinking it was the assistant keeper I called to know if anything was the matter, but he answered me from the lens room that all was well. Much puzzled, I went downstairs and to my consternation I saw lying on the table the log-book of the lighthouse, with the page recording the drowning of Poor Jordan staring me in the face! This is the only time the book has been taken from its place by other hands than mine or my assistants, and as to how it got on the table and lay open with the entry about Jordan will always remain a mystery to us here.

I have seen the semblance of the figure several times since and so have the others, and we are all prepared to take an affidavit to that effect. Something comes here, that we are positive. There is an old saying, ‘What the Reef takes, the Reef will give back.’ Poor Jordan’s body was recovered not long after his drowning, and in the pocket of his coat was found a note addresses to me – which he probably forgot to leave before he started on his fateful ride in that rough sea – instructing me to complete the entries of that morning – the day he died – as they were not brought up to date.

An undated article in the Bridgeport Public Library claims that, on stormy nights, “the specter of the reef is said to be flitting among the rocks, poised on the rail of the gallery that surrounds the lantern or swaying, as if in agony, among the black and jagged rocks that surround the base of the light.”

On September 21, 1938, when the worst New England hurricane of the 20th century struck, a lone keeper, George Petzolt, survived the night at the lighthouse. According to his son Harold, George Petzolt feared he might not live through that terrible storm as he watched boats, telephone poles and other debris sweep past.

In late 1969, the Coast Guard announced plans to remove the lighthouse and replace it with an automated light on a “pipe tower.” U.S. Representative Lowell Weicker and State Representative Stewart B. McKinney also took up the cause. McKinney asked the Coast Guard to reconsider, suggesting that they automate the light but retain the existing structure, which he called “a thing of beauty which lends a graceful touch to the shoreline area." The protests by politicians and numerous letters convinced the Coast Guard to call off the demolition. .

In April 2007, it was announced that the lighthouse would be available to a suitable new owner under the guidelines of the National Historic Lighthouse Preservation Act of 2000. On July 29, 2008, Beacon Preservation, Inc., of Ansonia, Connecticut, received notice that the organization had submitted a "superior" application and had been recommended as the new owners.

The lighthouse can be viewed from sightseeing cruises leaving Captain Cove Seaport in Bridgeport. Call the Seaport office at 203-335-1433 for more information.

You can read much more about this lighthouse in the book The Lighthouses of Connecticut.
Posted by Lighthouser at 7:00 AM 1 comment: