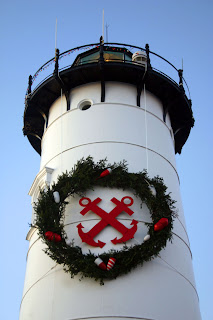 Volunteers of Friends of Portsmouth Harbor Lighthouse, a chapter of the American Lighthouse Foundation, have been decorating the lighthouse during the Christmas season for several years. Volunteer William Marshall has taken the lead in this effort.

Last night, William and I visited the lighthouse to make some adjustments. I took the photo above a short time later as it grew dark.