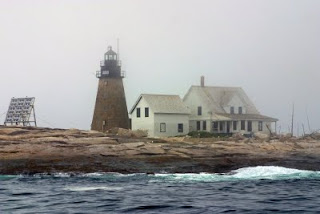 A few years ago, I had the pleasure of visiting Mount Desert Rock Lighthouse with some faculty and students from the College of the Atlantic in Bar Harbor, Maine. The light station is more than 20 miles from the nearest port on Mount Desert Island; it's nothing more than a stark pile of granite out in the ocean. When I was there, I felt like I was on another planet.

The light station was leased to the College of the Atlantic back in the late 1970s, after the light was automated and the Coast Guard removed its keepers. Under the Maine Lights Program coordinated by the Island Institute of Rockland, Mount Desert Rock Light, along with Great Duck Island Light, became the property of the College of the Atlantic in 1998. The college's Allied Whale program compiles and maintains catalogs for the North Atlantic populations of finback and humpback whales.

Mount Desert Rock suffered badly from the effects of Hurricane Bill in August 2009. The boathouse was mostly destroyed, and two walls of the generator shed were swept away. There was also water damage inside the keeper's house. This is a major setback for the College of the Atlantic's programs on the island. As Andrew Peterson, marine facilities superintendent for the college, aptly put it, "When it comes down to it, the ocean always wins."

You can read much more detail about the damage on this Facebook page.

If you would like to find out more about how you can help the whale research effort at Mount Desert Rock, please call Allied Whale at 207-288-5644.
Posted by Lighthouser at 7:33 AM No comments: