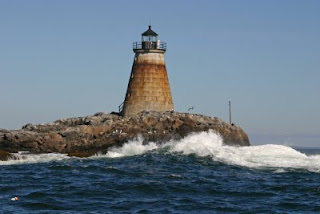 In 1836, the ship Royal Tar, carrying circus performers and animals, caught fire and sank near the ledge. In March of the following year, Congress appropriated $5,000 for a lighthouse on Saddleback Ledge.

The noted architect and engineer Alexander Parris (1780–1852) designed the tower. Construction was carried out in 1838–39. Another $10,000 was appropriated for the project in July 1838; the total cost of $15,000 made this an expensive lighthouse for its time. The lighthouse is a 43-foot-tall conical granite tower, originally topped by an octagonal wrought wrought-iron lantern.

The first keeper was Watson Y. Hopkins, a Maine native. Hopkins lived at the lighthouse with his wife, Abigail, and seven children, ranging in age from infancy to the late teens. The large family was crowded into living quarters inside the lighthouse tower that consisted of a living room with a cooking stove, two bedrooms, and a cellar. Hopkins painted a dismal picture of the living conditions at the lighthouse in 1842:

I was appointed keeper of this light, December, 1839, upon a salary of $450. I live with my family in the tower, which is the only building on the ledge. . . My family consists of nine persons. There is a living room and two chambers in the tower, besides a cellar. The copper spout carried round the tower to catch rain water has been so injured by the surf, that it is no longer of any use. The iron railing, which was secured to the rock around the tower, has been all swept away; also, the privy, which was carried away the first storm after its erection. The windows all leak in storms, the shutters having no rebates in the stone work.

The station was eventually assigned an assistant keeper, and there were two assistants by 1880. An attached wooden building was added, finally improving the cramped living conditions to some degree.

Robert Thayer Sterling interviewed Keeper W. W. Wells for his 1935 book, Maine Lighthouses and the Men Who Keep Them. Wells described life at the remote station:

It’s not so bad in the summer. We have lots of visitors, for then the sea is smooth . . . Winter we all hate the most, beginning when the summer guests have gone and the hotels on shore are closed. This means we will have to bank up the old station, get some good reading matter and snuggle down for a long period of isolation.

The light was automated in late 1954. The Fresnel lens was replaced by a modern optic, and the light continued as an automatic aid to navigation. The remains of the attached wooden building were blown up as a Green Beret assault exercise sometime around 1960, but the hardy lighthouse tower seems poised to weather many storms to come.

For much more on this lighthouse, see my new book The Lighthouses of Maine.
Posted by Lighthouser at 8:05 AM 1 comment: