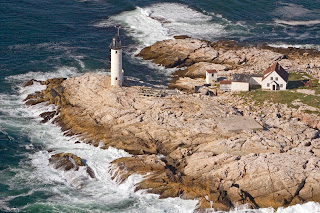 White Island Lighthouse is on the southernmost of the Isles of Shoals, a barren but fascinating group of islands several miles off the coast of New Hampshire and southern Maine. In the Coast Guard era at White Island, three men were assigned to the station; generally, there were two on duty at a time. I received the following story from Rev. Harold Roberts a couple of years ago. He was one of the Coast Guard keepers 1956-58. I never posted this online until now.

During the winter of 1956, we were experiencing one of those rare days at the Isles of Shoals when the sun was shining and the sea was placid, but it was still bitter cold. I decided to take the small double ended peapod dinghy we used to get on and off the island and row around to the back of the island get close to the seals that often lay on the rocks sunning themselves on such days. This day there was a larger number of seals lying on the rocks and I hoped I could get close to them with arousing them.


As I rowed around the back side of the island about 200 yards out I suddenly heard a roaring noise to my right. A huge wave, a groundswell about 20 feet high, was coming right at me. I swung the bow of the boat into the wave but not fast enough to prevent the boat from being overturned and me being dumped into the ocean.

The water was bitter cold and I was clothed with heavy foul weather gear including heavy robber boots. The weight of my boots filling with water pulled me down and prevented me from using my legs to kick myself to the surface. Judging from the pressure in my ears I must have sank at least 15 feet before I started slowly rising to the surface.

The air trapped in my jacket saved me from being pulled down to the bottom. As soon as I broke surface I started to sink again.  My hands were so frozen I could not unclasp the boots that were preventing me from swimming. I knew I was in grave danger of drowning. In desperation and fear called out to God to save me.

A moment later, the capsized dingy suddenly appeared right next to me. I was able to hold on to the boat to stay afloat. My next and most immediate problem was the cold. I was freezing to death. I was aware that a man can't stay alive very long exposed to those conditions. The other problem was I was several hundred yards off the island and no one knew I was in trouble. Charlie Martin and I were alone on the island and he was unaware of my predicament.

I must have fallen asleep from the cold and was not aware that the boat with me clinging half conscious to the side had drifted to the island and a gentle swell pushed us into the rocks. I had enough strength to climb up out of the water and make my way to the keeper’s house. Charlie Martin was in the kitchen when I came in the door. I must looked frozen which I was. Charlie got blankets for me to help me recover my body heat.

To this day I believe it was divine intervention that saved my life on that bitter cold winter day on the Isles of Shoals.
Posted by Lighthouser at 9:58 AM No comments: