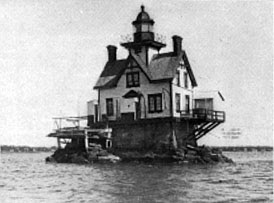 From the time the first European settlers arrived until the Civil War, the area along the east bank of the Providence River from Watchemoket down to Bullock’s Point was sparsely populated by farmers and fishermen. Bullock's Point got its name from Richard Bullock, who established a farm on the neck of land in 1666.

The point, which juts southward toward the mouth of the river, was surrounded by shoals that proved treacherous for the growing shipping traffic heading to and from Providence in the nineteenth century. After a Congressional appropriation of $1000 in 1872, a small lighted beacon was placed on a granite pier.

It was soon deemed a necessity to have a keeper living full time at Bullock’’s Point Light. An additional appropriation of $15,000 was obtained on June 23, 1874, for the building of a new combined lighthouse and dwelling. The station was finished in the early spring of 1876.

This lighthouse was unlike any other in New England—an attractive Victorian dwelling on a rectangular granite pier, with the short lighthouse tower and lantern centered on its roof. The sixth-order Fresnel lens exhibited a fixed red light.

Joseph P. Eddy was keeper from 1886 to 1892. His four children rowed to shore to attend school in the Drownville section of Barrington every day. The Eddys had many visitors, and Mrs. Eddy said she enjoyed living at the lighthouse better than living on land. The family endured a brutally cold winter in 1892, when even a steamer bound for New York City became lodged in the ice.

Captain William Thomas Tengren, who was born in Sweden, was keeper from 1901 to 1909 and again from 1918 to 1926. Tengren had gone to work on ships at the age of nine, and his travels eventually landed him in the United States.

Tengren lived at the six-room lighthouse with his wife, Charlotta, and their three children, Anton, Agnes, and Mary. The Tengrens added a deck to the lighthouse to serve as a “yard” so that the children could play outside.

Anton Tengren’s son, Thomas William Tengren, spent some time at the lighthouse with his grandparents when Anton was overseas during World War I. Years later Thomas would say, “You ain’t been cold till you’ve sat in that outhouse in January with a good stiff breeze coming in off the bay.” The outhouse, of course, hung over the river outside the lighthouse.

The next keeper was Andrew Zuius, who had been stationed at various locations including the Delaware River. On May 27, 1930, a sailboat capsized in a squall near the lighthouse, and Keeper Zuius rescued the two persons on board.

The hurricane of September 21, 1938, the greatest storm of the twentieth century in southern New England, undermined the pier beneath the lighthouse and did great damage to the building itself. Zuius survived, somehow keeping the light burning through the storm. In the morning he found that the wall facing the wind had been ripped away and the stairs had been washed out, and all his belongings were swept away.

Bullock's Point Light was discontinued shortly after the great storm and the structure was torn down a few years later.

For more, visit this page and this article.
Posted by Lighthouser at 8:50 AM No comments: