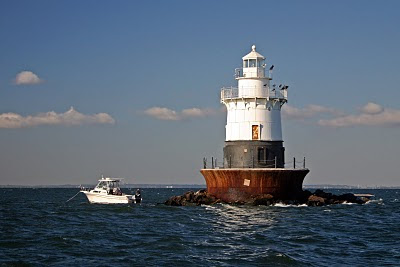 Under the provisions of the National Historic Lighthouse Preservation Act of 2000, if no suitable applicant -- such as a nonprofit group or a community -- is found for a historic lighthouse after it has been excessed by the Coast Guard, the property is sold by the GSA to the general public via an online auction. At least a dozen lighthouses have now been auctioned, including several in the Chesapeake Bay region.

Currently, there are four offshore lighthouses up for auction -- click here to see the list and current bids. The four are Borden Flats Light in Fall River, Massachusetts (see stories below); Latimer Reef Light in Fishers Island Sound, New York; Old Orchard Shoal Light and West Bank Light in New York Harbor, NY; and Ram Island Ledge Light off Cape Elizabeth, Maine. Latimer Reef has gotten a $15,000 bid, and Ram Island Ledge has a $10,000 bid. There have been no bids to date on the others.

All I can hope is that the parties who buy these priceless historic buildings realize their value to the nation as a whole, and that they give them the care they deserve. What will happen when the buyers eventually die? Will succeeding heirs possess the passion needed to care for these structures, which are extremely expensive to maintain over time? All we can do is hope for the best. 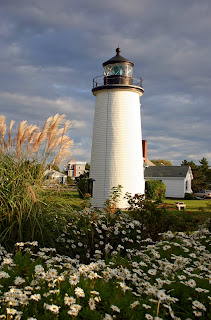 This year's open houses at Plum Island Lighthouse, an 1898 wooden lighthouse at the northern tip of Plum Island in Newburyport, Massachusetts, will be on these dates:

There is a short ladder to climb to the top, so sneakers are required. Children must be at least 5 years old and meet a height requirement to travel to the top. Tours are free, but donations to support the Friends of Plum Island Light, a nonprofit organization dedicated to preserving and restoring the lighthouse, are appreciated.
Posted by Lighthouser at 1:09 PM 4 comments:

Borden Flats story not over 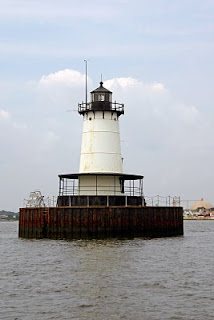 Click here to see the current list of online auctions being held by the GSA -- you'll see that Borden Flats Lighthouse in Fall River, Massachusetts, is one of the properties. I reported here a couple of weeks ago that the lighthouse would be re-auctioned after the 2008 buyer, Michael Gabriel, had reportedly defaulted on the property.

Mr. Gabriel says it isn't that simple. and he said in late June that he planned to go to court to stop the GSA from re-selling the lighthouse. “I want to buy the lighthouse, but they don’t want to sell it to me,” he said.

You can read all the details in the Fall River Herald News by clicking here.
Posted by Lighthouser at 11:25 AM No comments: