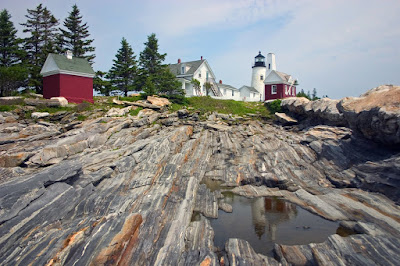 Pemaquid Point is one of the most frequently visited attractions of the Maine coast, receiving about 100,000 visitors each year. The name “Pemaquid” is said to have had its origins in an Abenaki Indian word for “situated far out.” Settlers Immigrants from Bristol, England, established a settlement at Pemaquid in 1631. Today, the area is part of the town of Bristol, incorporated in 1765.

The point, at the entrance to Muscongus Bay to the east and Johns Bay to the west, was the scene of many shipwrecks through the centuries. In May 1826, with as maritime trade, fishing, and the shipping of lumber were increasing in midcoast Maine, Congress appropriated $4,000 for the building of a lighthouse at Pemaquid Point. Jeremiah Berry of Thomaston was contracted to build the conical rubblestone tower, along with a keeper’s dwelling, also built of stone, 20 by 34 feet with an attached kitchen, 10 by 12 feet. Berry completed construction for the sum of $2,800. The fixed white light went into service on November 29, 1827.

Isaac Dunham of Bath, Maine, became the first keeper, at $350 per year. Dunham, who was born in Plymouth, Massachusetts, went to sea at an early age and visited many foreign ports. During the War of 1812, he served on a privateer.

The original stone tower didn’t last long, possibly because Berry may have used salt water to mix his lime mortar. A new conical stone tower was built in 1835 by Joseph Berry of Georgetown, who was the nephew of the builder of the first tower.

Dunham and many of his successors kept animals, including chickens, at the light station. It appears that Dunham was also an inventor of sorts. He received a patent for a system he developed to keep lamp oil from congealing in winter, and in 1837 Congress decreed that the Treasury was authorized to adopt Dunham’s improvements. It isn’t clear how widely his invention was adopted.

Keeper Joseph Lawler and his wife, Sophronia, welcomed a baby girl in 1868; Susie Lawler was the only child ever born at the lighthouse. Marcus A. Hanna, who was later acclaimed for a heroic rescue at Cape Elizabeth, succeeded Lawler in 1869 and stayed until 1873.

On September 16, 1903, while Clarence Marr was keeper, the captain of the fishing schooner George F. Edmunds tried to run for South Bristol Harbor in a gale. The vessel was driven by a strong gust into the rocks near Pemaquid Point and was dashed to pieces. The captain and 13 crew members died in the wreck; only two were saved. The captain of another schooner, the Sadie and Lillie, also died near Pemaquid Point in the same storm.

Leroy S. Elwel was keeper in 1934 when the light became one of the earliest in Maine to be converted to automatic acetylene gas operation. In March 1940, residents of Bristol voted at a town meeting to authorize the town's selectmen to purchase the property, except for the lighthouse tower.

The surrounding property became Lighthouse Park, and the keeper’s house eventually was converted into the Fishermen’s Museum. The museum opened in 1972 and has been operated since then by volunteers from the local area. The Pemaquid Group of Artists added an art gallery to Lighthouse Park in 1960.

In May 2000, the lighthouse tower was licensed by the Coast Guard to the American Lighthouse Foundation (ALF). Under the leadership of Dick Melville, a local resident, a chapter of ALF, the Friends of Pemaquid Point Lighthouse, was formed. The group soon restored the entryway to the tower and began holding open houses.

Pemaquid Point Light became the first lighthouse ever to ever appear on American currency in 2003, when its image appeared on the official Maine quarter.

By the twenty-first century, the tower’s healthy outward appearance belied the problems within; considerable water intrusion had caused deterioration of the tower’s mortar. It became apparent that significant restoration was needed in a hurry.

In February 2007, Lowe’s Companies and the National Trust for Historic Preservation announced that the lighthouse would receive $50,000 toward a $106,000 restoration. In June 2007, personnel from Building Conservation Associates (BCA), analyzed the tower’s coatings, work that was made possible by a $10,000 “New Century Community Program” historic preservation grant from the Maine Historic Preservation Commission. The remaining $46,000 needed for restoration was raised by the volunteers of Friends of Pemaquid Point Lighthouse, much of it a dollar at a time at open houses.

The tower’s repointing, which utilized the same type of natural cement-based material used during the original construction, was completed by the end of July 2007. A new coat of paint was applied in August. ALF’s executive director, Bob Trapani, commented, “The minute you drive or walk into Pemaquid Point Park, the lighthouse commands your attention in the wake of its restoration. It’s like a shining exclamation point on a seascape of blue.”

Volunteers of the Friends of Pemaquid Point Lighthouse (a chapter of the American Lighthouse Foundation) manages the tower only. Volunteers open the tower in season (Memorial Day to Columbus Day) to the public every day from 1:00 p.m. to 5:00 p.m. There is no charge to climb the tower, but donations are welcomed. For more information, contact Friends of Pemaquid Point Lighthouse, P.O. Box 353, Bristol, ME 04539-0353. Phone: (207) 563-2739.

A one-bedroom apartment in the keeper’s house is available for weekly vacation rentals. For information, call Newcastle Square Vacation Rentals at (207) 563-6500.

For more information, see www.lighthouse.cc/pemaquid.
Posted by Lighthouser at 1:59 PM No comments:

The public is invited to attend a special evening dinner celebration and fundraiser being held on November 7, 2009, at 6 p.m. in the ballroom of the beautiful Nonantum Resort in Kennebunkport, Maine. The event marks the 15th anniversary of the American Lighthouse Foundation (ALF).

The evening will begin with a social hour, hors d’oeuvres, music, and a silent auction. Following dinner, National Geographic photographer/producer Todd Gipstein will present his program “Ledge Light.” This entertaining program will highlight one of ALF’s newest lighthouse projects and will introduce you to New London Ledge Light, a well-known offshore beacon with a storied history and a future that’s brighter than ever.

Highlighting the evening will be the presentation of ALF’s 2009 Len Hadley Volunteerism Awards, the Keeper of the Light Award, and the Distinguished Lighthouse Community Service Award.

The American Lighthouse Foundation is a nonprofit organization whose mission is to save and preserve our nation’s historic light stations and their rich heritage. ALF accomplishes this in part through the restoration, promotion, and adaptive re-use of America’s historic light stations, as well as educational initiatives that foster the sustainable preservation of lighthouses and perpetuate the legacy of the men and women who have tended them.

Tickets (reservations required) for this event are $49.00 per person and include a choice of Prime Rib, Chicken Florentine, Baked Haddock or Vegetarian Strudel. Reservations can be made by calling the American Lighthouse Foundation’s Maine office at (207) 594-4174 or online at www.lighthousefoundation.org
Posted by Lighthouser at 12:57 PM No comments: Posted by Lighthouser at 12:03 PM No comments: