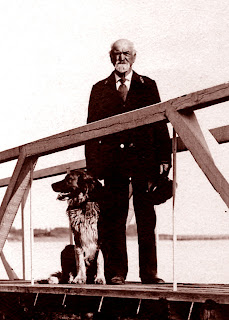 At the time of Card's death at the age of 88, a local newspaper reported, "The captain’s fidelity to duty cannot too highly be praised. Punctual to the minute, he literally stayed at his post year after year without a break. . . No man stood higher in the estimation of the Lighthouse Board, at Washington, than the keeper of Portsmouth Light." When he retired as a lighthouse keeper at the age of 86, he was believed to be the oldest keeper in the United States.

The memorial gathering will include readings about Joshua Card's life, as well as a special performance of the song "Lighthouse Keeper" by Neptune's Car. The folk duo will be performing a concert later that evening at Captain and Patty's restaurant as part of a weekend-long celebration of the tenth anniversary of the founding of Friends of Portsmouth Harbor Lighthouses as a chapter of the American Lighthouse Foundation in June 2001.

Admission to the memorial gathering is free. For more information on the weekend's events, see www.portsmouthharborlighthouse.org

Posted by Lighthouser at 10:31 AM No comments: