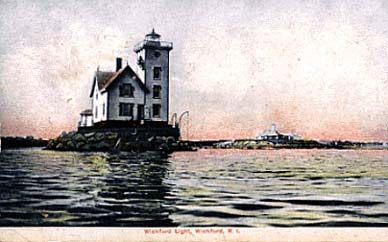 Wickford is a charming village of the town of North Kingstown. Established in 1663, the community is a tangle of small old streets and lanes with an impressive collection of late-eighteenth- and early-nineteenth-century homes. Wickford’s cozy, protected harbor developed as a shipping point for goods from the area’s large plantations. Foreign trade from Wickford also blossomed. Congress appropriated $3,000 for a light at the entrance to Wickford Harbor, and a light at Poplar Point went into service on November 1, 1831.

With increased ferry traffic between Wickford and Newport, the Lighthouse Board’s annual reports in 1878 and 1879 recommended, “Additional aids to navigation to mark the entrance to Wickford Harbor are required. A granite pier surmounted by a small light should be established on Old Gay Rock. . . . The light at Poplar Point could be discontinued if one on Old Gay is established.” On June 15, 1880, Congress appropriated $45,000 for a lighthouse on Old Gay Rock, about 200 yards offshore from the 1831 lighthouse at Poplar Point.

The lighthouse superstructure was an eight-room wood-frame Gothic Revival house. A square lighthouse tower was attached to a corner of the dwelling. A fifth-order Fresnel lens, showing a fixed white light 52 feet above the water, was first illuminated on November 1, 1882. The old light at Poplar Point was simultaneously discontinued. A fog bell and striking machinery were also installed.

The first keeper of the new lighthouse was Henry Sherman, who had been the keeper of Poplar Point Light since 1874. The light would have only three keepers in the course of its 48 years of service.

Keeper Edmund (his name was often reported as Edward) Andrews, who came to Wickford in 1893, was born in 1868 in Providence. He was the son of an English carpenter and an Irishwoman. Andrews went to sea aboard the George W. Darrison out of Block Island, and by 1891 he was working as an assistant lighthouse keeper at Whale Rock Light. While in that position Andrews married Lillian A. Sprague, 17, of Block Island. 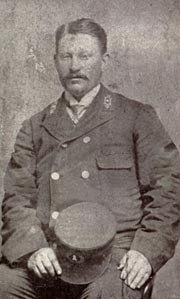 Edmund and Lillian had one child when they moved to Wickford, and three more children were born at the lighthouse during their years there. The children made the most of their waterbound home. Their son, Edward, later said that his knuckles were frequently banged up from riding his bicycle in circles around the lighthouse, bumping into the iron railings that surrounded it.

Andrews was recognized for the rescue of a drowning man in 1898, and a 1905 inspection showed the station in “excellent order.” There were to be some rough times, however. In 1907, Andrews was accused of stealing a neighbor’s chickens (he was later cleared), and was reprimanded for housing his brother-in-law and a friend at the station. The keeper pointed out in his defense that he had been ill and that his wife’s brother was there to row the family’s children ashore to school each day. The friend who had been staying at the lighthouse was a keeper of Block Island North Light. Andrews was told that he would have been allowed to have another person at the station if he was ill, but that he should have notified the authorities of the situation.

In 1909, Andrews was offered a transfer to Eatons Neck Light on Long Island, New York. He turned down this transfer, saying, “I would like to have a land station where there is no vapor lamp or an assistant keeper, not too far out of Rhode Island.” His request was never granted. Andrews spent the rest of his long lightkeeping career at Wickford Harbor.

In June 1930, Andrews requested a retirement with a pension, saying he suffered from “heart trouble and stomach trouble.” He retired after 40 years of service in 1930 and was granted a pension of $969.66 yearly. A medical exam recorded that Andrews had been suffering from heart disease, rheumatism, and a nervous tremor, among other ailments. Andrews died in Massachusetts at the Chelsea Naval Hospital in 1939, the year the Lighthouse Service was taken over by the U.S. Coast Guard.

The lighthouse was destroyed in 1930. As a cost-saving measure, it was replaced by a small, unmanned, automatic light. Today, a square skeleton tower showing a flashing green light tops a pile of rocks on the old lighthouse site.