Prints and cards of some of my photos are now available at imagekind.com - click here.

Posted by Lighthouser at 11:57 AM No comments:

This clip shows Edward Rowe Snow (1902-1982), the popular New England maritime historian and "Flying Santa" to lighthouse keepers, diving from Minot's Ledge Lighthouse, off Boston's South Shore, in 1962. I believe it was his 60th birthday. The door he's diving from is approximately 60 feet above the water.

For more on the Flying Santa, see www.flyingsanta.org. For more on Minot's Ledge Lighthouse, see lighthouse.cc/minots/

Posted by Lighthouser at 9:55 AM No comments: This photo was taken during the same sunset cruise as yesterday's view of Minot's Ledge Light. This was one of the most spectacular sunsets I've ever seen, and to be out in a boat near lighthouses at the time made it especially memorable.

Posted by Lighthouser at 7:44 AM 3 comments: 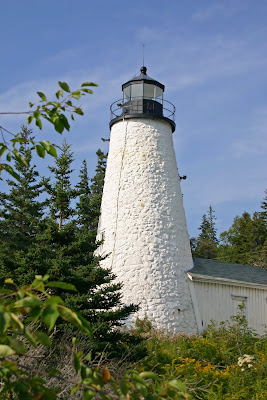 Castine, occupying a peninsula on the east side of the entrance to the Penobscot River, is a quiet town of only about 600 year-round residents. As shipbuilding and lumber traffic on the Penobscot River flourished, Congress appropriated $5,000 for a light station in May 1828. The site chosen was Dice Head, the southernmost point of the Castine peninsula. The spot is on land once owned by a family named Dyce. Although both spellings have often been used, the “Dice” spelling has predominated.

A conical rubblestone tower—42 feet tall from its base to the focal plane—and an adjacent one-and-one-half-story rubblestone dwelling were soon built, and a newspaper notice on November 5, 1828, announced that the light would go into service that evening. An octagonal wrought-iron lantern held 10 lamps and 14-inch reflectors, showing a fixed white light 129 feet above mean high water. The first keeper was Jacob Shelburne, a former sea captain.

The Lighthouse Board considered discontinuing the light around 1857, but instead major repairs were carried out in 1858. The entire tower was surrounded with a six-sided wooden sheath, and a fourth-order Fresnel lens replaced the lamps and reflectors. The wooden sheath was removed in the late 1800s. A 1,000-pound fog bell was installed in 1890, to be rung by hand in response to signals from passing vessels. A new hand striker for the bell was installed in 1897.

The lighthouse was mentioned in George Augustus Wheeler’s 1896 history of Castine. “A visit . . . can easily be made to the light-house at Dyce’s Head,” he wrote. “The gentlemanly keeper of the light, Mr. Charles Gott, will admit visitors to the tower at all reasonable hours except on Sunday.”

Edward T. Spurling, formerly at Avery Rock and Franklin Island, became keeper in 1911. After years of island life, the Spurling family’s move to the pleasant village of Castine was a welcome one. In a 1974 interview, one of the keeper’s six children, Beatrice Spurling, recalled life at Dice Head:

For us children it brought us an amazing new life. We could go to an organized school for the first time, and play with other children. Summer life on Dice’s Head was a new world for us. There were ladies with parasols, men in white flannels, buckboards to take them on quiet rides through the Witherle Woods and lots of chances for us to make pin money. I had a summer job at the “Dome of the Rocks” at 50 cents a day. And I could make extra money by going to the houses and helping out. I’ll never forget scrubbing bathtubs for 10 cents a ring.

When the Spurlings first moved to Dice Head, 11-year-old Beatrice attended the grammar school in Castine, which was within walking distance of the light station. It was the first time she had seen a schoolhouse after years of home-schooling at offshore stations. Beatrice took piano lessons for 12 years from Nina Macomber, a Castine resident. After a while, she was playing the piano at weddings and funerals at the local Episcopal church, and providing accompaniment for silent movies at the theater in town.

Maritime traffic in the area had fallen off, and in 1935 the light was discontinued. It was replaced by a skeleton tower closer to the shore. The keeper’s house and surrounding land became the property of the Town of Castine a short time later. In 1956, the lighthouse tower was turned over to the town.

The tower lost some chunks of mortar over the years. Inspectors found interior disintegration in the lighthouse that could have eventually caused serious problems. A method of repair called “slurry injection” had to be employed. This process involved slurry—clay or cement mixed with a liquid—being injected through holes in the tower. In 1997, the voters of Castine approved spending $98,000 to repair the lighthouse. Another $25,000 was approved in March 1998. The town also received $52,000 from the Maine Historic Preservation Committee, and Marty Nally, a contractor from the Campbell Construction Group, carried out the renovation.

The keeper’s house is rented by the town to help pay for the upkeep of the property; an artist, Nancy Carr, has lived in the house for over 30 years.

In September 2007, a windstorm or “microburst” toppled the skeletal tower that carried the navigational light. A few weeks later, the Coast Guard announced that it would install a new 300-millimeter optic in the lighthouse tower, making it an active aid to navigation again after 72 years in darkness.

Dice Head Light, a short distance from the Maine Maritime Academy, is easily reached by driving to Castine on Route 166 and turning right on Battle Avenue. The grounds are open to the public daily until sunset. A path leads around the tower, affording good views.

For more, see www.lighthouse.cc/dicehead/history.html
Posted by Lighthouser at 7:35 AM No comments: