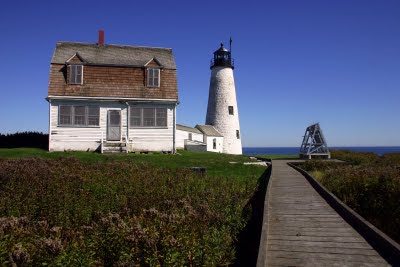 I just got this press release from the Friends of Wood Island Lighthouse:

Biddeford Pool, ME. The Friends of Wood Island Lighthouse (FOWIL) announced Monday that the first major phase of the lighthouse’s restoration has started. Construction boats left Vines Landing in Biddeford Pool Monday morning, ferrying tools, equipment and material to the island to begin a two month restoration of the interior and exterior of the lighthouse tower and its adjoining oil room. The work was contracted last week to Stone Age Masonry of Sabattus, ME. Only ten days after the bids were opened, Stone Age had mobilized and moved to get started ahead of the winter season.

FOWIL, a chapter of the American Lighthouse Foundation, was formed in 2003 to restore and preserve the lighthouse. Brad Coupe, chair of the FOWIL Executive Committee, spoke of the excitement the group feels as work gets underway. “We are ecstatic to see this goal become a reality. For six long years, our volunteers have been at this, devoting countless hours to maintaining the lighthouse and raising money,” he said. This phase of the work is being funded entirely by membership donations and donations from summer visitors who took lighthouse tours, by purchases at FOWIL art shows, sales of lighthouse merchandise, and by grants the group has attracted.

Wood Island Lighthouse, commissioned by Thomas Jefferson in 1808, was on Lighthouse Digest’s “Doomsday List” of America’s most endangered lighthouses in 2003. “We are pleased today to be pulling it back from the brink,” Coupe said. The tower is the oldest structure at the light station, having been erected in 1838. Hollis Curtis, owner of Stone Age, said, “We are excited to have been entrusted with the job of renewing this historic structure. We plan to deliver a completely restored tower to the Friends before the end of the year, if the elements cooperate,” Curtis said.

The tower work is the first of two phases planned to be completed in the next 15 months. The second phase will move to the keeper’s house. It will tackle the exterior siding, windows and roof, and it will return the porch to its attractive original design from 1906, when this house was expanded to its current Dutch Colonial design. This second phase will be funded by a HUD grant sponsored by Senator Susan Collins and initiated by the American Lighthouse Foundation’s executive director, Bob Trapani. “Without Senator Collins’ tenacious efforts on our behalf to get the federal appropriation, we could not accomplish all that is now within FOWIL’s reach,” Trapani said. He noted also that the appropriation will assist two other ALF lighthouses at Pemaquid Point and Owl’s Head. And, Coupe added, “Without the backing that this appropriation gave us, we would not have attempted to do the tower with our own funds. We owe Senator Collins a great debt of gratitude.”

Assisting FOWIL with the design of the restoration work and guiding them through the historic preservation regulatory process has been a team led by Ed Theriault of Theriault/Landmann Associates, Inc., of Portland, and Scott Whitaker of Building Envelope Consultants, South Portland. “Ed and Scott have been as enthusiastic about this project as our own members,” Coupe said. “They have worked seamlessly with the State Historic Preservation Commission and the Coast Guard to ensure that our work meets required historic standards at every step.”

Posted by Lighthouser at 4:08 PM 3 comments:

OK, it's not a New England Lighthouse, but I want to wish a happy 150th birthday to the Cape May Lighthouse in New Jersey, a real beauty! Click here for more.
Posted by Lighthouser at 2:56 PM No comments: I was going through some photos and came across this neat shot I had forgotten about. The Friendship, a reconstruction of a 171-foot three-masted Salem East Indiaman built in 1797, is seen here during a tall ship parade near Portsmouth, NH, in August 2008. Portsmouth Harbor Lighthouse and Fort Constitution in New Castle can be seen in the background. The small boat is from Captain & Patty's Cruises in Kittery Point, Maine; see www.capandpatty.com.

Here's the Friendship in front of the old prison at the Portsmouth Naval Shipyard: 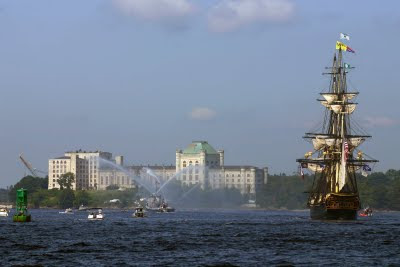 Posted by Lighthouser at 9:07 AM 2 comments: