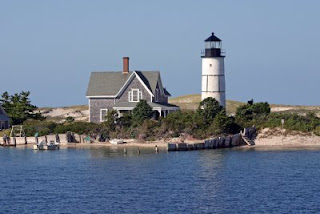 The eastern tip of Sandy Neck—a half-mile wide, six-mile long, dune-studded peninsula on the north side of Cape Cod—marks the entrance to Barnstable Harbor as well as the approach to the small harbor at Yarmouthport. In the days when shore whaling was a major local industry, Sandy Neck was the site of try works for the processing of whale blubber. Today, it’s home to a little cottage community just west of the lighthouse.


Congress appropriated $3,500 for a lighthouse at the eastern tip of the peninsula, a site known as Beach Point, on May 18, 1826. The light went into service on October 1, 1826. The first lighthouse consisted of a wooden lantern on the roof of a brick keeper’s house.

An 1843 report mentioned that shipwreck victims often took refuge at the lighthouse. The keeper, according to the report, needed a new boat; his present one was 8 eight years old and “in great decay.”

The original lighthouse was replaced in 1857 by the 48-foot brick tower that still stands, slightly north of the first light’s location. The distinctive pair of iron hoops and six staves that surround the central part of the lighthouse were added in 1887 as part of an effort to shore up cracks in the tower.

The waters inside Sandy Neck were often plagued by ice in winter. One cold day, Keeper Thomas Baxter was heading to Barnstable in his dory, alternately rowing, pulling, and pushing the vessel through the icy harbor. He caught his leg between the dory and the ice, suffering an injury that led to gangrene and eventually his death in 1862. Baxter’s wife, Lucy Hinckley Baxter, succeeded him as keeper and raised three children at the station.

George A. Jamieson became keeper in 1897. After a storm in late 1898, Jamieson discovered that his chicken coop and 40 chickens were gone, apparently washed away to their doom. As it turned out, the coop had washed safely ashore in Barnstable. The chickens were fine, although they did exhibit some strange symptoms that were attributed to seasickness.

Barnstable Harbor gradually declined in importance, and shifting sands had left the lighthouse in a less advantageous position. In the summer of 1931, when William L. Anderson was keeper, the lighthouse was decommissioned and its lens was moved to a steel skeleton tower 200 feet closer to the tip of Sandy Neck. The light was discontinued in 1952.

The lantern was removed from the lighthouse and the property was sold at auction in 1933. Ken Morton and Kee Hinckley manage the Sandy Neck Lighthouse property today for their family. In 2004, Morton began working with the American Lighthouse Foundation to have a replica lantern installed on the tower in time for its 150th birthday, in 2007.

The Sandy Neck Lighthouse Restoration Committee eventually became a chapter of the American Lighthouse Foundation. The installation of a new lantern began in the spring and summer of 2007. The job was completeted in the fall, and in October 2007 the lighthouse was relighted as a private aid to navigation, with a modern LED optic.

The trips offered by Hyannis Whale Watcher Cruises pass close by the lighthouse on their way out of Barnstable Harbor; check www.whales.net for more information. You can read much more about this lighthouse in the book The Lighthouses of Massachusetts
Posted by Lighthouser at 2:58 PM No comments: