A Visit to Borden Flats Lighthouse 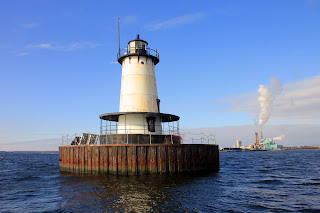 On June 16, 1880, a sum of $25,000 was appropriated for a lighthouse on Borden Flats, a dangerous reef at the mouth of the Taunton River near the busy textile center of Fall River, Massachusetts.
The cast-iron tower, which doubled as living quarters for keepers, was erected on a caisson. The lighthouse was battered in the hurricane of September 21, 1938. The storm left the tower with a pronounced tilt, which it still has. A new, much wider cylindrical base was subsequently added to provide more protection. 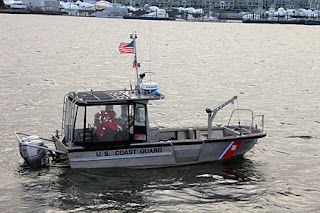 The light was automated in 1963. In June 2010, under the provisions of the National Historic Lighthouse Preservation Act of 2000, Borden Flats Light was bought at auction by Nick Korstad of Portland, Oregon.
I had the opportunity to visit this lighthouse with Nick and his mother, Cindy, on December 14, 2010.  The temperature was in the low 20s when we were picked up (in the boat seen above) at the Borden Light Marina in Fall River by members of the Coast Guard's Aids to Navigation Team Bristol (Rhode Island).
We climbed up a short ladder from the boat to the wide base around the lighthouse. It was obvious that birds -- seagulls, mostly -- spend lots of time on the base, which was littered with shells and the bleached bones of birds. The concrete base, added after the 1938 hurricane, is battered but intact.
The structure is in need of some TLC. The Coast Guard did some work on it in 2002, but some of the exterior and interior surfaces are in need of scraping and painting.
Overall, it appears to be in solid shape with no problems that appear to need emergency attention.  The interior is, for the most part, dry and clean.
Nick is dedicated to the idea of providing some kind of public access to the lighthouse in the future. He enjoys all aspects of lighthouse technology and history, and he's genuinely excited at the prospect of fixing up the lighthouse and making it easier for visitors to enter safely.


In general, I'm not a big fan of the government's auctioning of lighthouses. In another decade or so, we'll be able to look at the condition of the lighthouses that have been auctioned, and we'll know if the program has been a success. In this case, however, I'm very optimistic. I look forward to monitoring the progress of the restoration of Borden Flats Light.

Posted by Lighthouser at 8:57 AM 2 comments:


You can follow the auction here.
Posted by Lighthouser at 7:59 AM No comments: