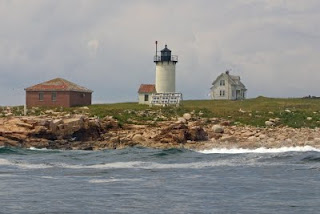 Great Duck Island, more than 200 acres in size, is about nine miles south of Mount Desert Island. There was discussion of establishing a lighthouse on the island as early as 1823 to aid mariners heading for the Mount Desert area and Blue Hill Bay from the south, but many decades would pass before the idea became reality. The Lighthouse Board recommended a light station on the island in 1885. Funds were appropriated in early 1889, and the government soon secured title to about 11 acres of land on the south side of the island.

Construction was completed by the end of 1890, and the light was established on December 31, 1890. The first principal keeper was William F. Stanley. The lantern on the 42-foot cylindrical brick lighthouse originally held a fifth-order Fresnel lens. Three keepers’ dwellings of six rooms each were built side by side near the lighthouse, along with outbuildings and a brick fog signal building with a steam-operated horn.

Keeper Stanley and his wife had three children. Their son, Lyford Stanley, who was two weeks old when the family arrived on the island, later worked as a lobster boat builder in Bass Harbor for more than 50 years. In an interview, Lyford Stanley told the Bangor Daily News about the difficult way of life on Great Duck Island. He recalled that supplies were delivered to the opposite side of the island and were carried by wheelbarrow to the keeper’s house. He described one foggy period when the foghorn blew for 13 straight days. “It was noisy down there,” he said.

The state provided no school for the island until 1902, when Nathan Adam “Ad” Reed arrived as an assistant keeper. Reed came to the island with his wife, Emma, and their 17 children. The Reeds were probably the largest family in American lighthouse history.

One of the Reeds’ sons, Dalton, was seven years old when the family moved to Great Duck Island. Young Dalton Reed enjoyed spear fishing for flounder in a gully near the fog signal building. He’d also fish from a dory to catchfor cod, haddock, and pollock. The family would salt and dry the fish.

The Reed family enjoyed spirited sing-alongs;, with Ad would accompanying on the organ. A crank-style gramophone also provided entertainment. At Christmastime, the children would string popcorn for the tree, and small gifts would be exchanged. “We would get one or two gifts and be satisfied,” Dalton Reed recalled.

Joseph M. Gray, a native of Brooksville, Maine, who went to sea as a cabin boy at the age of 11, came to Great Duck Island as an assistant keeper in 1901 after time at Crabtree Ledge Light and Mount Desert Rock Light. He advanced to principal keeper in 1905. Gray recalled life at the station in a 1938 interview:

I remained 18 years at this station and enjoyed every minute of the time I spent there. I had two assistants. There was a schoolhouse for the children, and the attendance at the school ranged from six to ten youngsters. We planted a garden every spring, and there were plenty of berries for canning on the island.

The Maine Chapter of the Nature Conservancy purchased most of the island in 1984. The organization has estimated that Great Duck Island supports an astounding 20% percent of Maine’s nesting seabirds. For Bar Harbor’s College of the Atlantic (COA), this makes the island an ideal field station for researchers and students. Happily, the college’s interest points to a bright future for the light station.

Great Duck Island Light can be viewed from the “Historic Lighthouse Tour” offered by the Bar Harbor Whale Watch Company; call (207) 288-9800 or 1-(888) -533-WALE or visit www.barharborwhales.com online for details.

You can read much more about this lighthouse in the book The Lighthouses of Maine.
Posted by Lighthouser at 1:57 PM No comments: