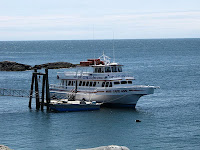 As you climb aboard the Miss Cape Ann to depart on a Capt. Bill & Sons whale watching tour, you are in for a trip of a lifetime! Capt. Bill & Sons Whale Watch has been a family owned and operated business in Gloucester, Massachusetts, since 1959. 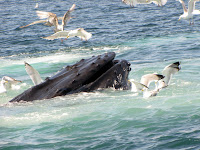 Located on Gloucester’s historic Harbor Loop, when you join Capt. Bill & Sons for one of our exciting whale watches you’re guaranteed to see whales.

Each whale watch lasts about three hours, and is guided by an expert naturalist who creates a fun and educational trip for visitors of all ages.

As you are taking in the amazing oceanic view from the deck of our boat, the Miss Cape Ann, you’ll also see several historic lighthouses.

Eastern Point Lighthouse – Built in 1832, this historic lighthouse is located on Gloucester’s Eastern Point. The lighthouse's large station is used as housing for the U.S. Coast Guard.

Annisquam Lighthouse – Marking the entrance to the Annisquam River, which connects Ipswich Bay to Gloucester Harbor, this lighthouse was built in 1801.

Thacher Island Twin Lighthouses – Often referred to as the Cape Ann Light Station, the two lighthouses on Thacher Island are the only remaining working twin lighthouses in the US. These magnificent lighthouses were constructed in 1861, replacing an earlier (1771) pair. 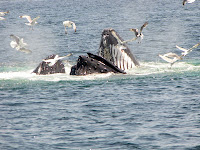 Not only is a Capt. Bill & Sons whale watching cruise a fun and exciting way to spend an afternoon in Gloucester, it’s also an educational trip for all ages! Visit us today at CaptBillAndSons.com to learn more about our adventurous whale watching tours.
Posted by Lighthouser at 8:48 AM No comments:

Responsible tourism is about respecting the environment, learning about regional culture and contributing towards local economy. Save The Bay's lighthouse tours encompass this in a day-long journey of discovering the historic lighthouses of Narragansett Bay. Sail down the West Passage to Newport and return home via the East Passage, viewing more than twenty active and inactive lighthouses, including a tour of Rose Island light.

Discover the lighthouses that played important role in history of the Bay and are actively assisting in marine navigation. These tours offers participants historic Bay lighthouses against a backdrop of wild and beautiful fall colors!

David Kelleher, a Friend of Pomham Rocks Lighthouse and an expert member of the American Lighthouse Foundation, will provide narration. Tour proceeds are used toward educating urban students about the Bay.


Save The Bay’s Alletta Morris departs from the Save The Bay Center in Providence promptly at 9:00 a.m. and returns at approximately 4:00 p.m.  Click here for more information.

Posted by Lighthouser at 2:16 PM No comments:

PORTLAND, Maine – The Portland Symphony Orchestra (PSO) will partner with seven Maine libraries this summer to take their popular KinderKonzert performance The Story of Abbie Burgess on the road. PSO’s KinderKonzerts are fun and interactive concerts for young children and are designed to educate and entertain, working to develop a love of music at a young age. The summer concerts, which are free of charge to the public, will be funded in part by a grant from the Maine Arts Commission, an independent state agency supported by the National Endowment for the Arts.


The Story of Abbie Burgess tells the true tale of a courageous young girl who tended Maine’s Matinicus Rock lighthouse on her own, braving the treacherous month-long Nor’easters throughout the winter of 1856. Her strength and determination attracted much attention and she became a renowned local heroine. Today, her story is featured in several popular children’s books.
“This program will serve to energize the PSO’s youngest audiences – and Maine’s youngest readers – around music and literacy, and will hopefully help instill in them a lifelong love of music and reading,” said Heather Summer, education and community engagement manager for the Portland Symphony Orchestra.

Children are encouraged to sing, dance and wiggle while they listen and watch the orchestra members tell the inspiring story of Abbie Burgess. The concert has a 40-minute running time and is meant for children aged 4-8. The PSO has made teaching materials pertaining to Abbie’s story available for download online to help prepare library staff and parents for their child’s concert experience.


For additional information contact the libraries directly or visit portlandsymphony.org.

About Portland Symphony Orchestra’s KinderKonzerts:
KinderKonzerts are a wonderful way for kids ages 3 through 7 to gain exposure to symphony music as they explore the different families of musical instruments. Each performance is part of a series of programs that feature the four families of instruments: woodwinds, brass, strings, and percussion. Attendees are encouraged to sing, smile, and engage with the musicians while they learn about classical music and symphony performances.
Posted by Lighthouser at 10:23 AM No comments:

Historic, beautiful restored Whitehead Light Station now offers programs for adults in the heart of the Maine coast. I've just received news of this wonderful opportunity coming up in a few weeks.

Escape to the island for a Mid-Summer Getaway!
Friday, July 6 - Sunday, July 8

Please join us for an All-Inclusive Getaway on the island this July.  Stay in the historic Light Keeper's House and allow yourself to leave the busy life of the mainland behind. Your getaway includes:


The cost for this unique island vacation is $629 per room for double occupancy, $429 for single occupancy, plus 7% Maine state lodging tax.

If you have questions, please give us a call (207) 200-7WLS or email us at info@whiteheadlightstation.org.