I recently let you know about Senate Bill 715, the National Lighthouse Stewardship Act introduced in the Senate by Senator Levin of Michigan and several colleagues. The bill is currently in the hands of the Energy Subcommittee. Sue Clark, on her excellent Lighthouse News site, has listed the members of that committee on this page. PLEASE contact these senators and let them know that you support the bill.

Click here to read the bill and follow its progress.
Posted by Lighthouser at 10:37 AM No comments: 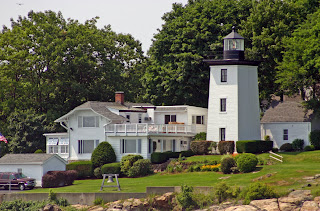 New England lighthouse buffs know Hospital Point Light Station in Beverly, Mass., as the home of the admiral in charge of the First Coast Guard District. Because this has been the case since the 1940s, public access to this station has been very limited. For years, the public has been able to visit the lighthouse on one day each year, during Beverly Homecoming Week.

There's wonderful news in today's edition of the Salem News. Rear Admiral Dale Gabel, the station's current resident, has agreed to make the station more accessible to the public by allowing Coast Guard Auxiliary to provide tours. Details aren't available yet, but the lighthouse might be opened as often as one day each month.

"We think it's one of the crown jewels of Beverly," said Phil Karwowski of the Auxiliary. "It's one of the big things in Beverly's maritime heritage." I couldn't agree more!

Bravo to the Coast Guard Auxiliary and Admiral Gabel. Thanks to them, the public will have the opportunity to experience one of the most beautiful light stations in New England, up close and personal.

Here's a quick historic side note on Hospital Point. During the presidency of William Howard Taft (1909–12), a large home at Woodbury Point, on the shore between Hospital Point and Beverly Cove, became the summer White House. A newspaper item of August 24, 1909, reported that the president’s son Charley—about 12 years old at the time—had visited the lighthouse: “He climbed the lighthouse in order to look out on to the water and when he reached the top he complained of being sick. The little fellow was assisted to the ground floor . . . and he felt much better.”

For more, visit my website or read my book, The Lighthouses of Massachusetts.
Posted by Lighthouser at 10:12 AM 2 comments: