The Ghosts of New London Ledge 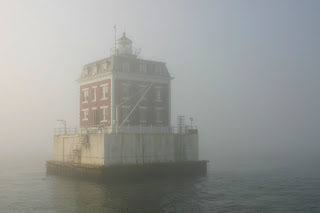 Strange events were said to be commonplace in the Coast Guard era at New London Ledge Lighthouse, at the mouth of the Thames River in Groton, Connecticut. Doors opened and closed themselves; the TV turned itself off and on.  A deck “swabbed itself.” Coast Guard Officer in Charge Randy Watkins said he once heard his name being called from an upstairs room when the other crewman was asleep.

Watkins’ wife Lucretia spent a night in the master bedroom and said she was awakened when the door opened, followed by “the eerie feeling of someone in the room, staring.'’  And one time two fishermen secured their boat and came inside for a visit.  The men laughed at talk of a ghost, but stopped laughing when saw that their boat had been untied and was drifting away.