Restoration of Wood Island's light comes about | Portland Press Herald
Posted by Lighthouser at 10:03 AM No comments: If, like me, you remember the years when this lighthouse was a rusting eyesore, you'd have to agree that its restoration is a miracle. The Friends of Plum Beach Lighthouse have accomplished amazing things.

Posted by Lighthouser at 8:58 AM No comments: 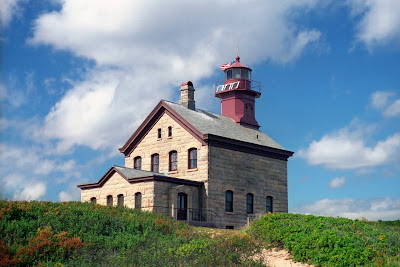 Block Island was long cursed as a stumbling block for coastal shipping traffic. The island is 14 miles from Point Judith, Rhode Island, and the same distance from Montauk Point, New York. Many shipping disasters were the result of vessels running up on the long sandbar that extends for a mile and a half from Sandy Point at the north end of the island. There was once a small peninsula called the Hummock at the northern extremity of the bar, a place frequented by islanders for picnics and berry gathering.

In the decade preceding 1829, 22 ships were wrecked on Block Island. On March 2, 1829, Congress appropriated $5,500 for a lighthouse at Sandy Point to warn of the dangerous bar and to guide coastal traffic entering Long Island Sound from the east. Two lights, about 30 feet apart from each other on the roof of the keeper's dwelling, went into service on December 10, 1829. The first keeper was William A. Weeden, a native of Jamestown, Rhode Island.

Within a few years, the lighthouse was being severely threatened by the erosion of the sandy beach. Congress appropriated $5,000 on March 3, 1837, for the rebuilding of the lighthouse farther from the sea. The building was soon completed. Weeden remained keeper and moved with his family to the new site, which was in the dunes about a quarter-mile inland from the original site.

The 1837 lighthouse was certainly safe from encroachment from the sea, but the station was still plagued by the deep sands that shifted greatly in storms, and by seabirds that frequently smashed the lantern glass. The more secure location also rendered it less effective as a guide to navigation. The inland light sometimes confused approaching navigators, who assumed it was closer to the point.

The sum of $9,000 was appropriated in 1856 for the building of a lighthouse on the island’s southeast shore, but it was decided instead to use the funds for rebuilding of the North Light. The 1857 lighthouse was soon in danger of being lost to the forces of wind and sea, and $15,000 was appropriated for a new station on July 28, 1866. This time a sturdy granite combination lighthouse/dwelling was planned, similar in design to the ones built around the same time at several locations in Long Island Sound. The handsome and sturdy two-story granite dwelling has a cast-iron light tower at the front end of the peak of its roof.

Contractor John Beattie of Fall River, Massachusetts, obtained the huge granite blocks for the lighthouse from a quarry at Leete Island in Long Island Sound, near Guilford, Connecticut. According to Robert M. Downie in his book, Block Island—The Sea, the blocks were delivered to Block Island by a schooner, placed on skids, and hauled by oxen to Sandy Point.

The new light was illuminated for the first time on September 15, 1868, with a fourth-order Fresnel lens showing a fixed white light, 61 feet above sea level. The lighthouse is located about 400 yards south of its predecessor. Based on the fact that it is still safe and sound after 138 years, the Lighthouse Board must have selected the proper site this time.

Hiram D. Ball had taken over as keeper of the previous lighthouse in 1861, and he moved to the new one when it went into operation. Ball was a Block Island native who had first gone to sea at the age of 13 as a cook on a West Indies–bound schooner. At the age of 20, he became captain of the Newport schooner Eagle, and he went on to skipper a number of other vessels. In his History of Block Island (1877), S. T. Livermore described the lighthouse under Keeper Ball as a “favorite resort for visitors, both on account of the natural scenery, and the agreeableness of the respectable family of Mr. Ball, the keeper, whose ample means could furnish him a far more pleasant home, especially in winter.”

The next keeper after Hiram Ball was Elam Littlefield, another Block Island native who must have regarded Sandy Point as paradise after spending seven years at wave-swept Whale Rock Light at the entrance to Narragansett Bay. A few years after he arrived, Littlefield was given more responsibility when the light was changed from fixed to flashing. This meant that every four hours, the keeper (or a family member) had to wind a clockwork mechanism that rotated the lens on a bed of mercury.

Littlefield stayed for 32 years, longer than any keeper in the North Light’s history. About halfway through his tenure, his peaceful routine was spectacularly interrupted by one of New England’s most unforgettable shipwrecks.

Early in the evening of February 11, 1907, the Joy Line side-wheel steamer Larchmont left Providence bound for New York City in stormy conditions. The sole passenger list was on board, and there has been much debate over the number on the ship; it was probably somewhere between 120 and 200. A northwest wind was already blowing nearly 40 miles per hour as the steamer headed down the Providence River, and visibility was low. Shortly before 11:00, when the Larchmont was about three miles off Watch Hill Light, the schooner Harry Knowlton loomed out of the darkness and collided directly with the steamer. The wounds proved fatal, and the Larchmont sank in less than 15 minutes.

Capt. George McVey and seven other crewmen escaped in a lifeboat and apparently tried to pick up survivors, but the harsh conditions prevented it. Some of the passengers managed to launch five additional lifeboats and a raft into the frigid waves. The icy winds propelled them directly toward the gleam of the Block Island North Lighthouse.

Keeper Littlefield was awakened early in the morning on February 12 by the frantic barking of his dog, Leo. The keeper was then startled by someone knocking on a window. When he opened the door, a teenaged boy fell near his feet, nearly dead. “More coming, more coming,” was all he could manage to say. The boy, Fred Heirgsell, later said that he had nearly given up hope, but was encouraged when he heard the barking dog.

Littlefield woke his wife and children and phoned the nearby lifesaving station. Captain McVey reached Block Island alive along with seven others in the crew. Only three passengers arrived at the island alive in the other lifeboats, and the heroic crew of the fishing schooner Elsie rescued another eight survivors after they drifted for 12 hours atop the deckhouse.

The keeper’s wife and children played a major role in caring for the survivors. The lighthouse became a makeshift hospital, with strips torn from bedspreads used as bandages. In 1974, Block Island historian Robert M. Downie interviewed the keeper’s daughter, Gladys, who was 17 at the time of the Larchmont disaster. Gladys ran errands between the lighthouse and lifesaving station during the ordeal. She told Downie about one man who was brought into the kitchen, more dead than alive. One of the lifesaving crew and Gladys’s sister, Austis, tried to revive the man, but he died. Gladys vividly recalled the arrival of Captain McVey, who simply said, “Two hundred lives lost.”

Keeper Littlefield had the solemn duty of taking his horse and cart along the beach, picking up the bodies that had come ashore and taking them to the lifesaving station. The exact number will never be known, but over 100 had perished, with more than 40 bodies washing up at Sandy Point. The remains of the Larchmont now lie in about 130 feet of water, three miles southeast of Watch Hill.

In the spring of 1956, the Coast Guard was preparing to automate and destaff the light station. The last Coast Guard keeper was 23-year-old Seaman Donald M. Lawson, from the Allston section of Boston. Lawson lived at the lighthouse with his wife, Margaret, their one-year-old son, Ricky, and a large tomcat (“a good mouser”) inherited from previous keepers. Lawson painted the interior walls of the lighthouse bright yellow. “There wasn’t much else to do,” he explained.

Coast Guard personnel occasionally checked on the equipment after automation, but little maintenance was done on the building. It didn’t fare well in the harsh environment, and occasional intrusion by vandals didn’t help. The exterior woodwork began to rot and rain got inside the lighthouse. Near the end of 1972, the Coast Guard erected a steel skeletal tower north of the lighthouse with an automatic flashing light, and the old building was boarded up and abandoned in January 1973. By this time, the roof was practically caving in.

Officials of the town of New Shoreham let the Coast Guard know of their interest in the lighthouse. Soon a new committee, the North Light Commission, was formed, with members appointed by the town council. The lighthouse would eventually belong to the town, but it took a circuitous route. It was turned over along with the surrounding 28 acres to the U.S. Fish and Wildlife Service in 1973 and was designated the Block Island National Wildlife Refuge. Since then, the refuge has grown to incorporate 127 acres.

About $80,000 in grants and donations was used to complete phase one of the lighthouse’s restoration, the renovation of the building’s exterior, by 1980. The roof was replaced, along with all flashings, moldings, windows, and the railing around the lantern gallery. Bulletproof (and vandal-proof) Lexan panes were installed in the lantern, and much of the rotting wood trim was replaced. In November 1983, the lighthouse was transferred from the U.S. Fish and Wildlife Service to the town along with two acres of land, in exchange for a perpetual conservation easement on 20 acres of migratory bird habitat. Over the next few years, more work was completed on the building’s interior.

Work on the interior continued, and by the summer of 1993 the first floor of the lighthouse was opened to the public as a museum. From Memorial Day to Labor Day in 1994, more than 14,000 slogged through the soft sand to visit the lighthouse.

Among the leaders in the long haul to restore the building is Rob Gilpin, a mason by trade. Gilpin had worked all over Block Island, but said that working at Sandy Point gave him a new appreciation for the loneliness and hardship endured by the light’s keepers. Gilpin is now co-chair of the North Light Commission and the North Light Association. The North Light Association was founded a separate nonprofit membership organization to raise funds for the restoration of the lighthouse.

An inspection in 2001 showed that the lighthouse still needed major work. The iron tower had badly deteriorated, especially where it met the rest of the building. The cost of the restoration of the tower and roof is about $700,000. The town was awarded $400,000 in June 2002 from the federal Transportation Enhancement Program, and a $100,000 State Preservation Grant was announced on December 6, 2006. Another $100,000 was awarded by the town, and $95,000 in donations to the North Light Association were applied to the project.

Click here for photo prints.
Posted by Lighthouser at 8:02 AM 2 comments: