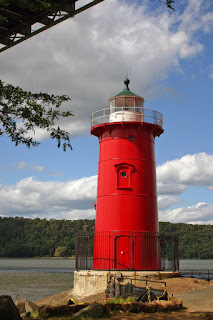 This week's lighthouse is slightly outside the New England region, but I'm including it as a preview of my new book, The Lighthouse Handbook: Hudson River & New York Harbor, published by Cider Mill Press. After many years specializing in New England lighthouses, it was fun for me to visit and learn about a new set of lighthouses. Because of a popular children's book, this one might be the best known of the surviving lighthouses on the Hudson River.

This is a condensed version of the section on Jeffrey's Hook Light in the book, The Lighthouse Handbook: Hudson River & New York Harbor.

The point of land known as Jeffrey’s Hook is on the west side of Manhattan Island, on the east shore of the Hudson River and about 12 miles north of Upper New York Bay. As shipping traffic increased in the vicinity in the late nineteenth century, a navigational light was needed to help warn mariners away from a treacherous reef near Jeffrey’s Hook. In 1889, a 20-foot-tall red stake was erected with two red lanterns, one hanging ten feet above the other.

In 1918, officials of the Bureau of Lighthouses decided that an extant lighthouse tower, built in 1880 and previously in use as the North Beacon at Sandy Hook in New Jersey, would be relocated to Jeffrey’s Hook. On October 10, 1921, the tower was reassembled in its present location. A 1,000-pound fog bell was mounted on the lower part of the lighthouse. A local caretaker or “lamplighter” wound the clockwork mechanisms that sounded the bell and rotated the lens.

The massive George Washington Bridge was completed in 1931. The suspension bridge spans the river from the sites of Fort Washington on the New York side to Fort Lee on the New Jersey side. At the time of its dedication, the bridge had the longest main span in the world at 3,500 feet. The bright lights of the bridge rendered the lighthouse virtually obsolete. It was still in operation in 1942 when Hildegarde Swift and Lynd Ward wrote the popular children’s book The Little Red Lighthouse and the Great Gray Bridge.

In the beginning of the book, the lighthouse is proud of its role in navigation: “It felt big and useful and important. ‘What would the boats do without me?’ it thought.” When the bridge is completed in the story, the lighthouse is left feeling small and insignificant.

But one foggy night, the bridge tells the lighthouse that its light and bell are still needed, that it is still “the master of the river.” The lighthouse calls, “Look out! Danger! Watch me!” Its place in the world was secured.

Despite the popular book and public affection for the lighthouse, the Coast Guard decommissioned it in 1948. When plans were announced to auction the lighthouse, a flood of letters from fans of the children’s book and other concerned citizens convinced the government to make other plans. On July 23, 1951, the lighthouse was given to the City of New York.

In 2002, a 300-millimeter lens was installed, and the lighthouse was relit as a private aid to navigation. The relighting came at the annual Little Red Lighthouse Festival on September 19, 2002.

thouse on Manhattan Island may be reached by driving or taking the “A” train to West 181st Street. Walk west on 181st Street toward the river, cross a pedestrian footbridge and follow the path to Fort Washington Park and the lighthouse. City park rangers lead school tours and conduct tours of the lighthouse for the public on occasion in summer. For the schedule and more information, call (212) 304–2365, or write to Urban Park Rangers, Inwood Hill Park, 1234 Fifth Ave., first floor, New York, NY 10029.
Posted by Lighthouser at 3:05 PM